In September of 2014, a spill at the DeGrave farm leaked 640,000 gallons of manure. It was the largest spill in Door County history.

When it comes to services provided by Door County government, nothing is more important to residents than the health of our groundwater. Not ambulance services, prosecuting criminals or even conducting elections.

A 2009 survey of more than 1,000 residents on the peninsula revealed that protecting our water is the most important service provided by the county.

Though the state entrusts much of that work to the Department of Natural Resources, in practice the job falls largely on the shoulders of Bill Schuster and his staff at the Door County Soil and Water Conservation Department (SWCD). In fact, of the eight natural resource protection topics surveyed in 2009, six are handled by the SWCD.

In September of 2014, a spill at the DeGrave farm leaked 640,000 gallons of manure. It was the largest spill in Door County history.

On a February day, Schuster sat at the conference room table of the Soil and Water Conservation Department dunking tea into a brown ceramic mug as he explained the evolution of groundwater quality protection in Door County.

“I think most people just have the expectation that government is protecting their water quality and they don’t get involved unless something is going on that they object to or they think is wrong,” said Schuster.

His department took on greater water quality enforcement responsibilities in 2004.

Previously, in an instance where a property owner was violating groundwater rules, the county would make an appeal to the DNR, asking them to inspect the case. If the DNR deemed the conservation effort valuable enough relative to all other concerns throughout the state, it would then go to the Department of Justice (DOJ) and ask for permission to take action against the environmental concern.

“The larger the spill, the greater the response, everything else being equal,” said Beth Erdman, spills coordinator for the DNR’s Northeast region. “Size of the spill is one factor in determining the impact of the spill, along with substance and location.” 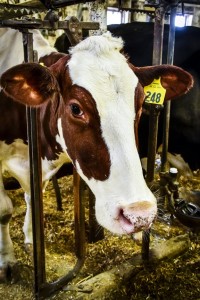 A typical cow produces 18 gallons of manure every day.

While an incident might be of tremendous importance to residents of Door County, it might be small potatoes to the DNR or the DOJ.

“If you’re an attorney sitting at the Department of Justice and you’ve got a big PCB issue in the Fox River and a manure discharge in a stream in Door County and you only have enough time to do one case, what happens?” Schuster asked rhetorically.

To ensure greater response, the county approved ordinance Chapter 23 of the Door County Code in 2004, which mirrors the state statute for natural resource protection.

Chapter NR 151 of Wisconsin’s Administrative Code describes the duties of state agencies, particularly the DNR, in protecting natural resources. The Door County Code adopted this statute “word for word” according to Schuster, substituting “SWCD” for the state agencies.

The ordinance handles non-point agricultural standards and prohibitions. Nonpoint pollution is that which does not deal with a specific point of pollution such as a burst pipe, but broad contamination such as agricultural waste spills or stormwater runoff.

With local control, the SWCD can address concerns the DNR doesn’t have the resources for, with full authority for inspecting land, enforcing compliance and issuing citations.

Rules only go so far in groundwater protection

“We’ve had only a few large enforcement cases and most people comply,” said Schuster. “We are in the position of helping them comply but we are also in the position of requiring them to comply. So our relationship goes from great with people who want to do things, to very tense when we have to do regulatory action.”

For years agriculture was relatively unregulated. More stringent regulation came to Wisconsin in the late 1990s when the DNR began a priority watershed program to address nonpoint pollution. As agriculture evolved from family farms to much larger operations in the last two decades, scientists traced contamination back to animal waste, bringing demands for stronger enforcement.

Most farmers have come to recognize their role in protecting groundwater. Still, Schuster’s staff is tasked with asking people to change the way they’ve done things for decades, which is not always readily accepted.

“We still have some of the older property owners that at this stage in the game they just don’t want to deal with doing anything,” said Schuster.

When county conservationists identify a problem in nutrient management plans, from a report by a neighbor, or by driving by the land themselves, they meet with the farmer to address the issue.

“It’s always better to try to work with someone up front than to correct them later,” said Dale Konkol, site inspector for the SWCD.

But in order to require compliance from landowners, these government agencies must offer money to help offset the costs of new or improved waste management systems.

When a property is noncompliant, implementing changes is entirely voluntary until these funds are offered. Once funds are offered, landowners are required to get in compliance whether they accept the funds or not.

“Some landowners would prefer not to enter into a contract with a government agency,” said Schuster, and they elect to pursue compliance on their own.

Still, Schuster said enforcement can only do so much when it comes to ensuring groundwater health.

“We’ll never have enough staff to keep an eye on everyone all the time,” he said. “Eventually, it comes down to people doing the right thing voluntarily. Even though you can’t catch every speeder, most people drive at a reasonable speed because they want to be safe. Ultimately, we rely on the same idea.”