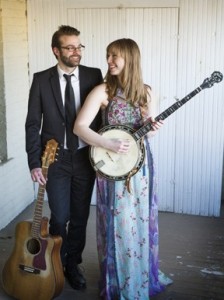 Longtime Door County duo Nick Hoover and Jess Holland recently decided to call themselves something other than their first names: Death Folk. Photo by Kelly Avenson.

Jess Holland and Nick Hoover are two Door County musicians who play together often; they recently decided to call their duo Death Folk. Don’t be intimidated by their seemingly morbid name, which was the first thing they explained when I interviewed them. The name, Death Folk, comes from their “fondness for some of the old hard times folk songs,” which they describe as having “dark beautiful harmonies.” They play not only blues type folk music but also some uplifting bright folk songs and some modern and popular music like Buddy Holly. Nick Hoover plays the acoustic guitar, Jess Holland plays the banjo, and they both sing vocals.

Although they have just come out with their official duo and name, Jess and Nick have been playing music together since 2008. They describe their song writing process, up until this point, as writing songs separately. And after writing their own songs they would play them for each other to see if they could work for both musicians. They would then work on the songs to sing and play together.

Their intent with forming Death Folk is to do more collaborative writing. Hoover describes this new writing process as very different from writing on your own, and even a bit scary. He mentions the need for chemistry with your partner and that you never know what the finished song will end up to be. Holland also adds that by the end of the summer “the goal is to have enough material written together to record an album.” Even while I interviewed them, they were taking a break from practicing their music together.

Once the hectic summer comes around they will have less time to write. Hoover describes this as almost being a blessing in disguise. Because of the lack of time, they are almost forced to get songs done and written in whatever free time they have. He says sometimes you just “wake up in the middle of the night and come up with something elegant.”

Along with their music careers, Hoover and Holland also have to balance their own working and family lives. Holland has a husband and two-year-old child to care for with a full-time job. Hoover has another job as a massage therapist. During the summer months he takes time off from massage therapy to focus on his music career, playing many gigs and going to a lot of rehearsals.

Currently, the two are focusing on getting ready for the busy summer season in Door County. They already have a lot of gigs and events lined up to play. The duo performs at parks, restaurants, festivals, galleries, weddings, and funerals. They have even played their music in a barn, which although we live in America’s Dairyland, I still found surprising.

Hoover and Holland’s debut event as Death Folk will be May 3 at The Cookery in Fish Creek starting at 5:30 pm.