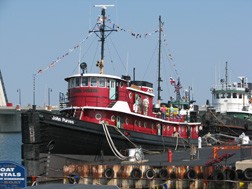 The Door County Maritime Museum will resume tours of the Tug John Purves in Sturgeon Bay. Tours will be conducted on Saturdays in April before a daily schedule begins in May.

The immaculately restored 149-foot vessel has proven to be an extremely popular attraction since opening to the public in August of 2008 following a remarkable five-year restoration project. Many of those same volunteers now are members of the docent team that conducts the 45-minute tours.

Built in 1919 and christened the Butterfield, the tug has a colorful past that even included World War II duty in the Aleutian Islands. The tug made its way to Sturgeon Bay in 1956 when purchased by Roen Steamship Company. It was eventually sold, but the tug now carries the Roen colors and has been outfitted to appear much as it did while operated by Roen in the 1950s and ‘60s. Capt. John Roen, company owner, renamed the tug in honor of his long-time employee and general manager.

The cost of the tour is included in the $11.50 admission fee to the museum or is also offered separately for $6. In April, tours are dependent on weather. Call ahead or check dcmm.org to confirm tour availability. Tours begin at 10:30 am and go until 3:30 pm. The museum is located at 120 N. Madison Ave. between the two downtown bridges on Sturgeon Bay’s West Side. For more information call 920.743.5958 or visit dcmm.org.