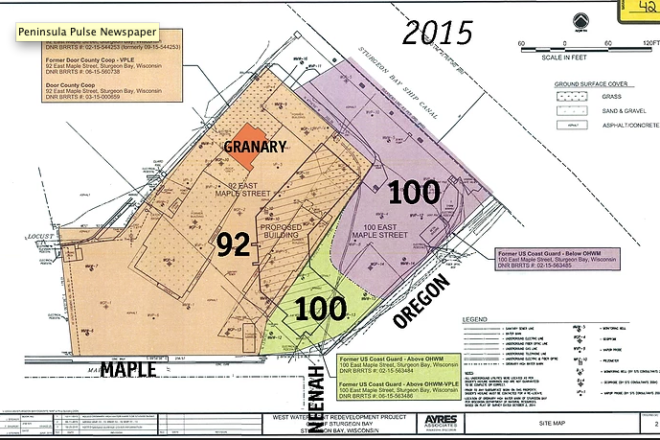 While the Friends of the Sturgeon Bay Waterfront declared a win after the two-day trial against the city that ended Feb. 10, Sturgeon Bay Administrator Josh VanLieshout considered it something of a split decision.

The case was heard by Judge Raymond Huber of Waupaca County after Door County Circuit Judge D. Todd Ehlers recused himself because he knew some of the Friends group members.

“Obviously we would have liked a decision that would have gone entirely in the city’s favor, but when you really look at it, Judge Huber didn’t necessarily rule in any one party’s favor. At the end, he said, I expect both sides will want to appeal.”

“On lot 100, he saw things the way we expected he would,” VanLieshout said. “Lot 92, he enjoined the sale but made a condition that once the city gets an Ordinary High Water Mark determination, his prohibition on the sale would be lifted. The city can do whatever it wants on the upland part of parcel 100. Is it an out and out victory for anybody? No. It is a straight-up loss? No. It’s somewhere in between. Purgatory.”

VanLieshout said a written order is expected from Judge Huber in 10 days.

“That’s what we’ll spend our time looking at,” he said.

Despite the city’s take on the outcome, Friends of the Sturgeon Bay Waterfront spokesperson Dan Collins said it was a huge win for the community.

“I think the judge saw what was clear and compelling and obvious, so much so that he didn’t even take a moment in chambers after the summary arguments. He just ruled from the bench,” Collins said.

At question was the nature of the land the city wanted to sell to a private developer to build a hotel. The Friends maintained that the property was filled lakebed, which would make it public land that cannot be sold for private development.

But after all the animosity generated in the case that has been roiling since announcement of the hotel in the fall of 2014, can fences be mended?

“I think the city has really been closed to themselves, and when I say the city, I really mean the mayor and the people around him,” Collins said. “The mayor has really not been communicative. I’ve called him at least a dozen times and have never heard back from him. I’d welcome his call today. There has got to be a productive outcome to this. It’s a community-based outcome. It’s something we can all work together on and we’re really looking forward to that. I know there are probably some bruised egos. We would welcome a way to communicate.”

Collins said he hopes the Friends effort will result in more participatory governance.