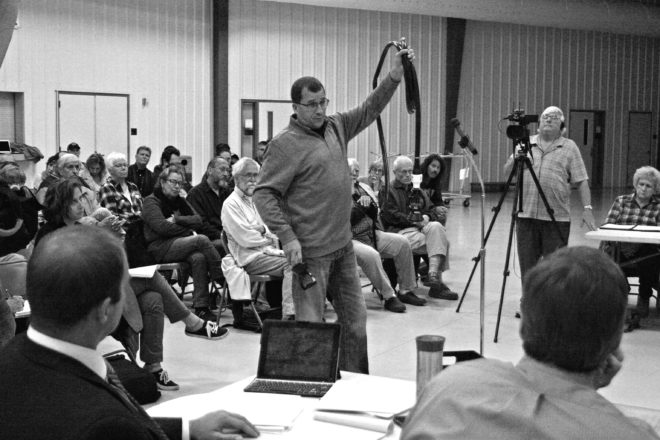 In a 4½-hour joint meeting of Kewaunee County’s Land and Water Conservation Committee (LCC) and the Public Health Committee on Nov. 2, the members hammered out revisions to what is now known as the Manure and Agricultural Waste Irrigation Ordinance. In separate votes, both committees voiced support for the amended ordinance and passed it on to the county board for their consideration.

Due to the federal holiday recognizing Veterans Day on Nov. 10, the Pulse had to go to press a day early so could not get the results of the Nov. 7 county board meeting on this resolution, but according to county board chair Robert Weidner, who attended the Nov. 2 meeting, the ordinance is expected to pass.

“A lot of effort went into the drafting of the ordinance and subsequent revisions and amendments,” he said. “Many of the amendments were the result of committee research and public involvement. I strongly believe that the majority of the county board will support and vote to adopt this ordinance.”

The first move at the Nov. 2 meeting had LCC chair John Pagel relinquish the committee chair to vice chair Charles Wagner after numerous citizen complaints that as the owner of Pagel’s Ponderosa, the largest family owned farm in the state, Pagel has a conflict of interest as dairyman and chair of the committee that deals with industry issues. While Pagel will remain as chair, Wagner will serve as acting chair of the committee until the term expires with the April 3 election and the resulting reorganization of county board assignments.

The committee members then heard from 20 people during the expanded public comment period, with comments ranging from farmers and agronomists asking the committees to take a “sober-minded” view of irrigation drip as another tool in a farmer’s kit to those who believe approval of the drip irrigation ordinance will be one more assault on the health and welfare of county residents.

Here are some of the details hammered out by the committee:

The result, said Lee Luft, a member of the Land and Water Conservation Committee, “was that the key safeguards built into the early versions of the ordinance were preserved while we were able to streamline some of the detailed language that will make compliance faster and easier for the farm community while making monitoring and enforcement by the Kewaunee County Land and Water Conservation Committee more straightforward.”