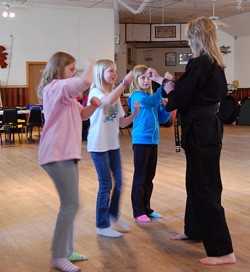 Martial arts icon Bruce Lee seems a perfect physical specimen in his movies, but in real life his left leg was nearly an inch shorter than his right, and he wore spectacles as a kid and contact lenses later to correct his nearsightedness. His first martial arts style was a close-in style called Wing Chun, chosen so he could see his opponent better. The short leg dictated his stance, and he adapted to that.

Bruce Lee’s philosophy was to accept his limitations for what they were and capitalize on them.

“Instead of trying to do everything well, do those things perfectly of which you are capable,” he once said.

These thoughts are an inspiration to Sensei Marci Faustini, who opened the Living Hope Dojo in June 2013 and teaches USA Goju Karate in the large dance hall in the back of the Institute Saloon.

“The only reason I’m lucky enough to have the dojo here is that Kay and Dennis [Haen] here at the Institute Saloon are providing the space. I, in turn, am teaching Kay and her two grandsons,” Faustini said.

“Some have knee issues. Some have hip issues,” Faustini said. “My sister Lynne had her hip replaced. Since she’s been in karate, she feels more mobile.”

Lynn Schuster, standing on one foot, executes a kick with her other leg in the air.

“I couldn’t do this before. This is karate,” she said. “I think this is better balance than I’ve ever had in my life, but I practiced doing that. I never practiced balance before.”

Schuster said her hip surgery was 16 months ago. She began taking karate classes with her sister last July.

“I noticed after my hip replacement, there wasn’t pain in the hip, it was in the leg. The tendons and leg muscles were extremely sore. My leg wouldn’t hold up,” she said.

She started attending karate lessons more to support her sister than thinking it was going to change her life.

“When I got here I found out that I was healing the hip. I also put yoga with that, but I know it was a lot of the karate. I was really thinking about being able to do this. I could see little increments of, ‘Wow, I couldn’t do that last week.’

“In karate I did a lot of different movements that I don’t normally do,” Schuster said. “I was paying more attention to different movements, different katas, and I wasn’t thinking about pain. As I kept moving, I’m positive karate helped move me forward, with core strength and balance.”

Faustini said that is the discipline of karate she wants to share with others.

“It’s really all about strong mind, strong body, strong spirit,” she said. “It all starts in the mind, the choices that you make.”

While all are welcome at the Living Hope Dojo, Faustini especially wants to empower women.

“There’s a big need for it,” she said, and a major reason why she decided to open her own dojo.

“I saw a need for more women,” she said. “A lot of times when you go into a dojo, it’s a lot of men. There are different things women must learn because women are attacked differently. A lot of times a man’s going to get a punch thrown at him, a woman’s going to be grabbed.”

While Faustini will acknowledge that it is harder for a woman to get respect in the martial arts realm, she very recently received the honor of being named Goju instructor of the year by the Martial Arts Hall of Fame.

Faustini’s own interest in the martial arts began in the 1970s.

“I couldn’t afford to go to a dojo, a dojo being a place where one practices karate,” she said.

But she had two friends who were studying Kempo Karate and were teaching her outside of their dojo. She refers to that as her unofficial start in the world of karate.

“I started back officially in 2010 and just went all out,” she said. “I was at the dojo anywhere from three to seven days a week. My sensei is Mark Stephens, down at the YMCA in Manitowoc.”

She quickly climbed through the ranks and now is a 2nd degree black belt.

Recalling her own early experience of not being able to afford martial arts training, Faustini founded her dojo on the principle that affordable martial arts opens the door for more people, so she is willing to work out financial details with anyone who wants to become a student. Eventually she would like to incorporate the dojo as a nonprofit entity and then develop fundraising to provide scholarships, especially for low-income women who couldn’t otherwise afford a martial arts course but who may need it more than anyone.

She is also prepared to give demonstrations or host groups that are interested in martial arts, such as a recent Monday afternoon when Faustini invited her students for a lesson with a group of Girl Scouts made up of Rori Krueger, Madi Volkmann and Colby Demmin and two Girl Scout leaders, Amy Haen and Jenny Krueger.

All the Living Hope Goju students were proudly dressed in snappy Gis (snappy is an appropriate word for their karate uniforms, for as Faustini pointed out to the Girl Scouts during the lesson, you want the cloth arms of your Gi to snap when you execute moves).

After some warm-up exercises, Faustini ran her students and the Girl Scouts through some basic moves, and then taught what turned out to be a quick course in self defense – how to break away if someone grabs you, how a well placed elbow or knee can incapacitate, how to use your voice as a weapon.

In essence, Faustini told the group, the key to self-defense is keeping your wits about you in order to frustrate the attacker’s intent to harm you.

“Self defense begins in the mind,” she said.