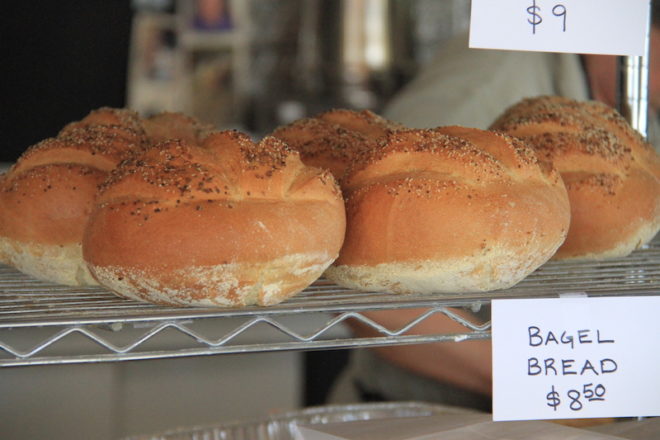 Loaves often sell out, but customers may call ahead to reserve. Photo by Aleah Kidd.

The introduction to the About section on MacReady Artisan Bread’s Facebook page concludes with, “Stop in and see us. We’d love to meet you.” After doing just that this past weekend, I can confirm that Jenny MacReady truly would love to meet you. The bakery – set back from Highway 42 in downtown Egg Harbor – offers wonderful fresh bread, bakery goods, soups, salads and sandwiches, all served in a cozy atmosphere that makes you feel right at home.

The rustic farmhouse decor and clusters of cafe tables inside the bakery certainly do their part to create a warm space, but it was the people behind the counter who really boosted the good vibes. Jenny – an owner along with her husband, Michael – warmly greeted customers by name as they strolled in the door, sometimes reaching for their prepared-ahead order. Going into their eighth season of baking, it’s clear they’ve built a following of customers who are eager to make their weekly visit.

Each morning Michael bakes a variety of loaves from scratch for the day, using original recipes and grain sourced from Meuer Farm in Chilton, Wisconsin. Meuer Farm is a sustainably operated farm where grains are grown, harvested and milled, creating a high-quality, single-source grain product. Bread baked using these grains is also high-quality, offering a distinct taste and texture.

“We bake several varieties each morning: usually a fruit, a whole grain and a few others. This year we are also doing a sweet and savory bread pudding and daily quiche,” Jenny said. “The menu lists our soup of the day, and we have the chicken salad and egg salad, which everyone seems to love.”

Because the loaves are freshly baked each morning, some of the favorite varieties don’t last long. On this particular day, the top seller – the Door County tart-cherry and dried-cranberry bread – had run out before noon. There was just a lone loaf set aside for pickup, which teased each new customer with its presence.

“I’ll have to tell Ann that she could resell this loaf and make a profit!” Jenny joked after several people asked whether they could take it home.

Another hot seller was the bagel bread: a white-bread loaf with thicker brown crust and a coating of everything-bagel spices. A yearly visitor from Chicago had made the loaf a new tradition, commenting, “I get some every time I visit Door County. We made the mistake last year of assuming they bake it everyday, so this trip I called ahead to make sure I could get some!”

The vacationer bagged two loaves and recommended I do the same. Jenny handed me a sample, and indeed it was delicious: chewy and dense, with lots of onion, sesame and garlic flavor from the seasoning. I had mine with a layer of butter, but it had enough flavor to eat plain. Cubed into soup or as bread for a turkey sandwich would also be delicious.

While I enjoyed my bagel bread, the stream of customers was steady – some staying for lunch, and some grabbing goods for the week ahead. The bakery is currently open Friday through Sunday, with plans to be open six days a week as the busy season arrives.

At the table beside me sat Mike and Janet, loyal MacReady customers since the establishment opened in 2012. They told me that they love the bakery for the authentic Door County ambience. “It’s just so cozy and inviting,” Janet said. “Everything from here is really good, but we especially love the atmosphere: it’s unique and very true to Door County.” It was their second visit in one weekend, first picking up a quiche to go, and then returning for Sunday lunch.

Take-and-bake items are a popular choice among returning customers, including chicken or beef and mushroom pot pies. Customers order in advance by sending a message on Facebook, Instagram or the website, and the pot pies are parbaked and ready to go in the oven at home. “I make a mean butter crust,” Jenny said with a smile.

The motto of MacReady Artisan Bread is “A good recipe for a happy life,” which pairs perfectly with its smiley-face logo. When I asked where the loopy, illustrated logo came from, I learned that Jenny’s grandmother used to sign all her letters with that same smiley face. Her grandmother’s home on Lost Lake in Jacksonport was what first connected Jenny to Door County, and happy memories of her grandmother are part of what prompted Jenny and her family to move to the area and start their second career as artisan bread bakers.

Seeing the bakery and its patrons, it’s hard to believe they haven’t been in Egg Harbor for decades, baking and greeting the many familiar faces. There’s no question you’ll find delicious, freshly baked bread at MacReady Artisan Bread, but the real treat is the loving effort put into the products and the service. Soon enough you’ll be on a first-name basis and calling ahead to reserve your favorite loaves.