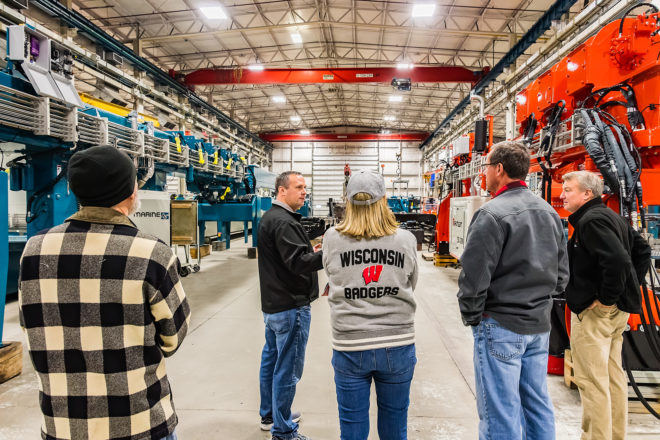 Among the visitors at Marine Travelift during Manufacturing Day on Oct. 27 was Morgan Huehnerfuss.

He had driven from Green Bay that morning with his girlfriend, Kahri Hajos, because he is proud of his work.

“My main purpose today was to show my girlfriend around to see what I do,” he said

Huehnerfuss is originally from Shawano. He was hired by ExacTech 2½ years ago, right out of NWTC. ExacTech fabricates the parts for the marine and industrial cranes and forklifts that Marine Travelift builds for customers around the globe.

After taking the tour of Marine Travelift, led by Trent Olsen, director of finance and human resources, and seeing some of the finished work, including a crane and forklift destined for Hong Kong, Huehnerfuss said, “I think we put out a really good product. It’s cool to see all the things we do and the size of the things we do.”

He said before he was hired by ExacTech, “I never even considered Sturgeon Bay or Door County area as a fabrication area,” which he added, is why Manufacturing Day is such a good idea. “I think people should come out and see what people are doing here. It really opens your eyes.”

Jim Schuessler, executive director of the Door County Economic Development Corp., said that is exactly the point of Manufacturing Day.

“Not everybody realizes there are great companies here that offer family sustaining wages, with quality of life benefits to match,” he said. “We definitely have some growing companies here. We want to show that off today.”

Two days before Manufacturing Day, students from area schools toured the manufacturing businesses at the industrial park and Fincantieri Bay Shipbuilding. Schuessler also convened a press conference with Green Bay media in order to get the word out that Door County is open for business.

“These 12 companies participating are hiring more than 400 people between them,” Schuessler said. “That’s a big deal in a city of little more than 9,000, in a county of around 30,000. That means millions of dollars. Those are family sustaining wages. A lot of the jobs, you don’t necessarily have to have a specific skill set. Many of the companies are willing to train.”

Olsen of Marine Travelift described the company as “as an engineering solutions company, so whatever our customers need to lift, we’ll design a crane so they can do it.”

He said Marine Travelift is looking for assemblers and an engineer while sister company ExacTech needs welders.

“Some of the assembly jobs are entry level, as long as somebody has a mechanical brain, we can teach them how to do this,” he said. “They’ll have an iPad with instructions on it. It’s almost like a kid’s Lego project. It shows you how to put the parts together and how to assemble it.”

After hearing reports from the 12 companies that interviews continue to be conducted as a result of Manufacturing Day, Schuessler said the strategy worked.

“We were very pleased with the turnout,” he said. “We had people coming from all over northeastern Wisconsin that had heard about the job opportunities. Many came resume in hand. That was the big first step, creating awareness of the opportunity.”

Schuessler said he would like to hold similar events for other sectors of Door County’s economy. “We have to find a way to support hospitality,” he said as an example.