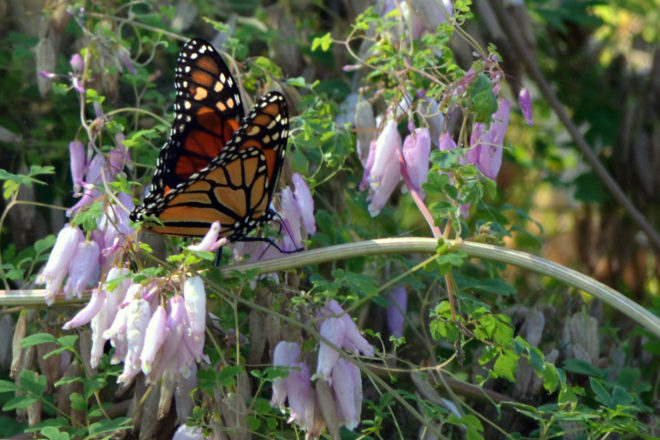 Monarch habitat in the middle of Lake Michigan? Yes!

Feb. 21 marked the 105th birthday of one of our oldest national wildlife refuges and Great Lakes migration routes for migratory birds and other species, such as monarchs.

Located in Lake Michigan, off the tip of the Door Peninsula, the refuge started as a mere two-acre island that was originally named Green Bay Reservation. Today, this essential stopover habitat for birds and other migratory species consists of five islands and is framed by two states.

Biologists and land managers have been roughing the waves and extreme weather of Lake Michigan to help colonial nesting birds for more than 100 years, but the refuge boasts more than nesting birds. While they started with a small footprint that focused on bird conservation, botanists and other researchers from around the world have come to study the diverse plant life that has persisted here for millennia.

The chain of islands running north of Door County up to the southern part of Michigan’s Garden Peninsula act as a set of stepping stones for migratory birds and monarchs to rest and replenish their energy needs with ample supplies of food. The islands are also a geologically unique feature, being part of the Niagara Escarpment, a fault line extending from Niagara Falls through Canada, Michigan and Wisconsin.

The islands that make up the refuge protect a special ecosystem type called alvar, a limestone covered by a thin soil layer, which is absent on the mainland. Some of the islands also contain Northern Mesic Forest communities that are home to 45 species of concern. St. Martin Island supports 43 neo-tropical migrant birds and 26 species of greatest conservation need in Michigan. More than 400 plant species, including the dwarf lake iris, a federally threatened species, have been found here and the island’s broad shallow “flats” offshore are prime areas for spawning fish.

Plum Island is home to one of the last remaining U.S. Coast Guard lifesaving stations in the Great Lakes and is the only island in the refuge open to the public. Friends of Plum and Pilot Island have been working for almost a decade to restore the many historical structures on the islands and are a valued partner. The refuge is open Memorial Day weekend through Labor Day.

Visiting the island will get a lot easier this summer season, since a dock restoration finished last fall. Refuge staff are currently working on a special use permit to allow for commercial use of the dock as well. Once this is finalized, regular sightseeing day-trips are expected.

Learn more about how the Friends of Plum and Pilot Island are working to restore this piece of history at 1.usa.gov/1VsKgzq.