In June when it was time for the annual monarch butterfly survey at Newport State Park, Julie Hein called home to tell her young sons not to bother making the trip.

“It’s hard for me as a mom to tell my kids ‘don’t come, there are no butterflies to catch’,” she said.

Hein has spent 15 years studying monarch butterflies in Door County. Two years ago, when her oldest son was 8 years old, he caught more monarchs than the three adult scientists combined. He even got a thank-you note from Lincoln Brower, an expert who has spent 25 years studying Door County monarchs, for his help.

But not this year. This year Hein, Brower and Milwaukee naturalist Sue Borkin caught no butterflies, larvae or eggs and saw no milkweed, the only plant Monarchs use to lay their eggs. 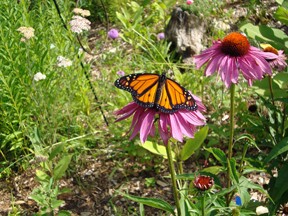 A male monarch rests on a coneflower. Photo submitted by Julie Hein.

“We didn’t have a sample this year,” Hein said. “We didn’t catch any butterflies, and we saw one adult in the three days of our census.”

The same thing happened at Crossroads at Big Creek in Sturgeon Bay during their annual late-summer survey, and as Brower says – no data is still data.

“We’ve seen one or two, but for our tagging effort we got skunked,” said Crossroads director Coggin Heeringa. “Usually we run out of tags within an hour and usually we have 100 or 200 tags, so this is very odd…This is definitely, definitely an odd year at Crossroads.”

It’s not just Crossroads and Newport scientists who noticed the low populations.

“People who hand raise them and do it as a hobby haven’t found anything this year,” Heeringa said. “It’s not just us, it’s the whole peninsula.”

And it isn’t just a Door County problem. Monarch butterflies spend the winter in Mexico and migrate in the spring to the U.S., taking multiple generations to make the round trip. This year winter populations in Mexico occupied only 40 percent of their usual habitat, the lowest since scientists started recording data in 1975, according to Monarch Watch. 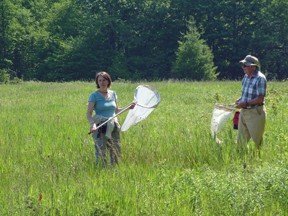 Monarchs often end up traveling to peninsulas such as Door County that funnel them shorter distances across bodies of water, but the real reason they travel is to find milkweed.

“If the milkweed is not up, they’re not going to keep coming north,” Hein said. “The whole purpose of their migration is to follow that milkweed so the females can lay their eggs.”

Changes in phenology, or natural seasonal cycles, could affect that migration. If late spring weather delays milkweed growth as it did this year, monarchs might not come as far north – maybe they’d stop in Illinois instead of making their way to Door County.

“We’re not going to lose the species but we may lose seeing it here in the Midwest,” Hein said. “There may come a time when the plants aren’t up at the same time the Monarchs should come, or the plants emerge too late and the Monarchs that would have come have already settled in another area. You may just have to go somewhere else to see large populations of them.”

But Hein warned not to point to climate change as the only cause of Monarch trouble.

“It’s very complex,” she said. “If you look at just one piece, like the climate piece or the insecticide piece, you can get wrapped up in that but you’re missing this broader, general issue that’s going on across species. It’s not just the Monarch.”

Hein said a loss of habitat in the U.S. and Mexico, extreme weather conditions such as last year’s drought, and the use of insecticides and herbicides contribute to falling Monarch populations, too.

“Milkweed simply cannot grow in the corn and soybeans because of the herbicides and insecticides in the crops themselves, the genetically modified crops and what they put on the soil,” she said. “There are many, many factors that are creating this problem.”

Monarch butterflies don’t pollinate specialty crops and they don’t make honey or anything that we directly use, which makes it hard to put a monetary value on the insect or understand its ecological benefit.

But Brower has come up with a reason to turn people’s attention to the orange butterfly. Monarchs are “the canaries in a cornfield,” he has told Hein, and trouble with their population could point to more trouble on the way.

“I wish I could tell you it’s such an important insect that it produces all these ecological benefits for us,” Hein said. “There are so many things we learn about this species and all species that help us in the bigger picture of our existence that to lose this understanding of this species and its migration is to lose a huge part of who we are and what we can do.”