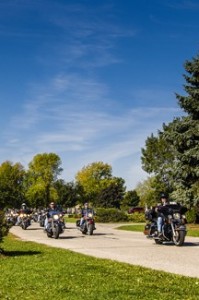 When Keith Yedica travels the country, he makes his trips about more than the destination.

“It’s the freedom of the road,” said Yedica, a representative of Wisconsin Motorcycle Touring. “To get out and just drive and enjoy the scenery, and enjoy it with other people who enjoy the same thing.”

Yedica doesn’t avoid long stretches of freeway – he calls it “the slab” – but he powers through them to get to the windy, shaded roads that make riding fun. He likes roads lined with trees with lots of curves when he’s on his motorcycle.

“The number one [attraction] is just scenery,” said Michelle Rasmussen from the visitor bureau. “We have unique roads, unique attractions, dining and lodging options.”

Many local businesses, like the Alpine Resort, offer amenities for motorcyclists. Owner Emily Pitchford said lots of motorcycle groups have visited the resort this summer. The resort has space to wash bikes, covered parking and a restaurant, and when motorcyclists get to the resort after riding through the rain, Pitchford offers up the resort’s laundry machines.

But laundry, parking spots and pretty roads aren’t the only concern for motorcyclists. Safety is key, Yedica said. He likes to ride through Door County in the spring and fall when it’s less busy. Crowded roads are dangerous because drivers often don’t see motorcycles coming.

“You’re always on the defensive when you’re on a motorcycle,” Yedica said. “Always.”

He also recommends riding in small groups and staggering so riders aren’t right next to each other. And if any riders in his group have more than one beer at lunch, they’re not allowed to drive.

According to the Door County Sheriff’s Department, there were 92 motorcycle accidents in Door County from 2007 through June 2012, including the Aug. 26 collision between a motorcycle and a car Highway 42 in Liberty Grove where a passenger was killed. In those five years, 101 motorcyclists were injured or killed, 51 of those injured passengers weren’t wearing helmets, and three motorcyclists were killed, two of which were not wearing helmets.

“If you’re going to ride a motorcycle, wear the protective gear,” Yedica said.

“Motorcycles have rights, and [drivers] really have to be more cautious around motorcycles that are obeying the law and make sure that they respect the fact that they’re on the road also,” Vogel said.