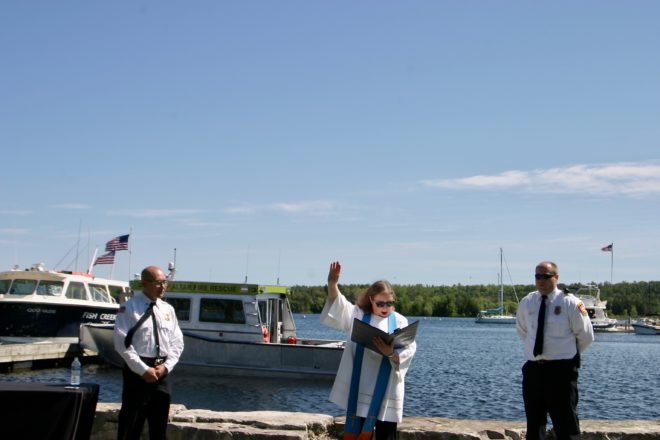 At a ceremony for the new Gibraltar Fire and Rescue boat – held the morning of June 22 in Fish Creek’s Clark Park – Gibraltar Fire Chief Andy Bertges expressed amazement that the boat was fully funded through donations large and small. He thanked the community for its support, adding that it inspires the department to deliver top-notch service.

The new rescue vessel – built by Lake Assault Boats of Superior, Wisconsin, according to specifications from department members – replaces a 1988 Boston Whaler Century that the department had been using. The new rescue boat brings the department into the 21st century with a heated pilot house that can transport two patients and EMS personnel, and it has updated radar, sonar and night-vision capabilities.

Pastor Dawn Volpe of Ephraim Moravian Church – and the spouse of Capt. Bob Volpe of the Gibraltar Fire Department – delivered the blessing of the new boat.