Not In My Back Yard.

Though the origins of this phrase are unknown, its meaning isn’t. Simply put, it is a characterization of residents opposed to proposals for a new development (often perceived as unpleasant) in their neighborhood especially, as the Oxford English Dictionary describes, “while raising no such objections to similar developments elsewhere.” 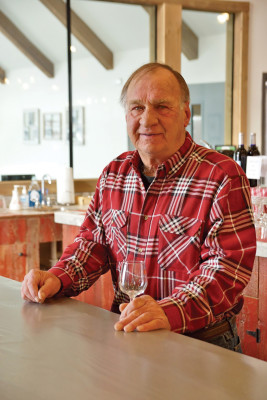 It was an attitude Orchard Country Winery owner Bob Lautenbach became well acquainted with in the late 1990s in Door County when he began developing plans for the construction of two separate apartment buildings on parcels of land he owned in the Town of Gibraltar and Egg Harbor.

It was a solution to a problem that was evident then and is more evident now:  a shortage of affordable living options for employees in Northern Door.

“We had some plans drawn up — two apartments and I forget how many each apartment would’ve held, maybe 20 units,” Lautenbach said. “It would’ve been primarily for housing for employees, whoever needed rooms.

“The idea was to get a bigger building with so many units in it to try to make it feasible so you could charge less,” he added. “It wouldn’t have been individual buildings; it would have been a larger apartment building.”

For more than a year, Lautenbach worked on construction plans, received building estimates, and worked with surveyors. During that time, he received some support for the plan from people who recognized the scope of the problem but a lot more resistance from the town and community members who were concerned that the apartments would create a “party” atmosphere.

“People were a little skeptical of what kind of situation it was going to be,” he said.

This, despite the Town of Gibraltar’s 20-Year Comprehensive Plan in 1998 stating its first population and housing objective was to “increase the supply of housing that is affordable to low- and moderate-income households.”

“The benefits would’ve been that it gave people that actually wanted to work up here and do a good job for the tourist industry a reasonable place to stay, which is a big issue,” Lautenbach said.

After a little more than a year, the plans for the two buildings were snuffed. On one parcel, Lautenbach had the Hidden Blossom condominium built — a construction route that required less zoning changes than apartment buildings. The condos are primarily owned by individuals in their 50s and older, Lautenbach said.

Today, he has adjusted his approach to employment to help alleviate the problem with finding affordable housing for his employees. The winery began staying open year round and hiring people from the area who already had housing established.

For Lautenbach, the solution to the housing problem comes down to two things:  finding the right piece of property and a change in perspective by local governments and residents.