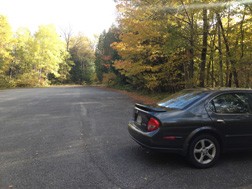 Quite recently, I had a panicked stroll through Newport State Park. I blame Halloween. I blame the sudden quietness of the county as many tourists and seasonal residents have departed. I blame a bartender at The Blue Ox who will remain nameless. I blame my father.

I pulled into Newport State Park on a lazy autumn afternoon and noted there was not another vehicle in the parking lot. ‘Lovely,’ I thought. ‘I need some alone time.’ But as I entered the forest, I envisioned the mute, masked madman Jason from Friday the 13th lurking behind a tree.

‘I’m gonna die. I’m gonna die,” I whispered, scanning the forest, recalling the gory scenes of 20-somethings on a camping trip dying in disturbing ways. The Blue Ox bartender thought it was hilarious happy hour entertainment the day prior. Yes, it was entertaining. It’s Halloween. Who doesn’t like to see a good-old-fashioned bloody murder now and then?

My walk had only begun and I was determined to hike at least a couple miles. I drove all the way up to Ellison Bay for heaven’s sake.

I strolled on and on, exhaling, taking in the autumn colors, calm blue water. The coffee I drank on my trip north was filling my bladder.

I suddenly missed the tourists. I missed couples awkwardly strolling hand in hand on trails too narrow for two. I missed the parents corralling their children forward – one with an infant usually strapped to their back. I missed the lone hikers like myself who need bathroom breaks and occupy the stalls next to me should I require immediate aid. 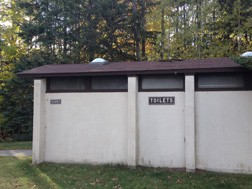 A haven of fear (and excrement) since I can remember.

See, my father once told me that during World War II Jews hid in vault toilets. If I remember right, we just saw a production of The Diary of Anne Frank. He thought it was a great example of how desperate Jews were to hide in places the Nazis wouldn’t look. Thanks, dad!

Two decades later, I’m still terrified of those wretched toilets – so much so I guilt one of my three sisters to stand in the stall as I squat and try to relax enough to pee.

I am alone in a huge park. I am about to pee my pants. I approach the ‘restrooms.’

I kick each of the three stall doors open. Yes, I kick them like an awkward long-legged ninja. What I would have done should Jason or hiding refugees happen to be behind the door, I’ve no idea.

I leave the stall door open and like Peter Pan think happy thoughts – fudge-bathed ice cream, leaping bottlenose dolphins. I relax. A crow squawks like it’s alerting all the other forest animals of my very vulnerable position. My thoughts are suddenly not happy.

And then I start humming/singing “You’re Beautiful” by James Blunt, exhale, inhale, pull up my pants, grab a squirt of hand sanitizer and run out of that building like it’s on fire. 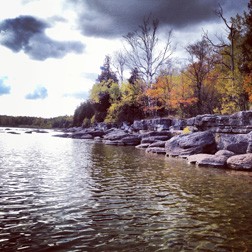 A view worth every shred of unwarranted fear.

The damned crow or eagle or whatever the heck it is squawks again. That’s when I sprint, (yes, sprint) toward the beach, the open water, away from the ‘restroom’ where I found not a hint of rest.

Once I reached the shoreline, I feel pretty darn proud of myself for surviving. ‘I’m alive.’

Bladder empty, adrenaline waning, I walk and climb and sit among the rocks. I find some peace, for at least thirty-five minutes.

I will admit I sprinted through the empty parking to my lone car and was only mildly surprised when I turned back and didn’t see Jason – the immortal mass murder of Friday the 13th – behind me.