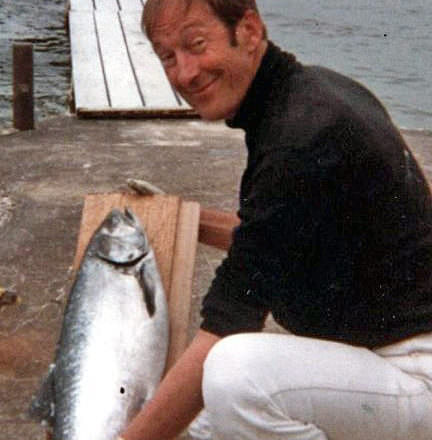 He and his wife, Joanne, who preceded him in death in May 2014, were long-time St. Simons residents, most recently residing at Marsh’s Edge. They moved to the island after completing professional careers in the Chicago, IL, area. For years, they maintained a second home in Sturgeon Bay, WI. Jim worked his entire professional career in advertising, first for the Chicago Tribune and later for the family of Tribune Company big-city dailies.

He was recognized as a trail-blazing leader in advertising sales and management, winning every available award throughout the course of his 40-year career.

Born April 4, 1928 in Evanston, IL, to Everett and Olga (Prill) Roberts, Jim grew up in neighboring Wilmette with his brothers, Bill and Dave, and sister, Jane. He graduated from New Trier High School where he sang on the choir and was the basketball team’s center. At 6’6″, he was usually the tallest person in the room.

After high school, Jim followed his older brother, Bill, to Michigan State University (Go, Spartans). He joined ROTC, achieved the rank of 2nd lieutenant and served in the Army during the Korean Conflict as 24th Division public information officer.

Jim returned to family life with his first wife, Rosemary, and young daughter, Amy, who was followed by Jennifer, then Laura and Sarah, both of whom preceded him in death. Later remarrying Joanne Joyce, he acquired three more daughters: Deb, Anni and Marti. Jim gained custody of his younger three daughters in 1969 and the new family moved together to a home in Lake Forest, IL.

He was an active evangelical Christian his entire adult life, helping to form the Chicago Full Gospel Businessman’s Fellowship breakfast group, Christian Laity of Chicago and many, many smaller groups and organizations aimed at providing tangible assistance to those in need. Jim continued his work in this area after moving south, maintaining an act and adeive interest in FaithWorks projects in Brunswick and Explorations in Antiquity Center, LaGrange, only recently retiring from board positions.

He and his wife were active in Wesley United Methodist Church at Frederica since first moving to the area in the mid-’80s. His deep bass voice could be detected most every Sunday from a rear pew. Jim’s wise counsel and clear insight were sought by each new pastor and leadership team.

A memorial service will be held in Sturgeon Bay, WI, in spring when his ashes will be interred in Bayside Cemetery.

In lieu of flowers, donations may be made to FaithWorks (www.faithworksministry.org) and Explorations in Antiquity Center (www.digging4it.com).

Condolences, memories, and photos of Jim, may be shared with his family at www.huehnsfuneralhome.com.