When a devastating fire engulfed the Carlsville Roadhouse in the early morning hours of June 14, an army of firefighters from every peninsula fire department converged on the scene, along with millions of dollars in fire trucks. But, particularly in rural communities, the best-trained firefighters and state-of-the-art equipment remains at the mercy of one, less-glamorous supply – water. 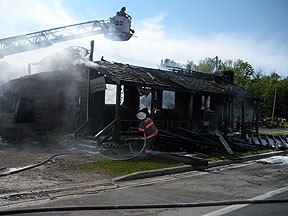 Firefighters use Sister Bay’s new 100-foot aerial ladder to get above the blaze at the Carlsville Roadhouse fire June 14. Fish Creek Fire Chief John Stahl attacks hot-spots below them.

Fighting a blaze may seem like a simple strategy from the outside: get trucks and firemen on the scene; find flames; douse with water. But for rural departments it gets much more complicated during a large structure fire like that of the Roadhouse.

When the water supply ran low in Carlsville, Schopf said his crew went into water conservation mode for about five minutes, using smaller hoses and targeting their attack to specific hot-spots.

“We have to be efficient and use our water where we absolutely have to in order to hold the fire where it’s at,” Schopf said.

Schopf said the water wouldn’t have made a difference in saving the Roadhouse, which may have been burning for an hour or two before smoke became visible and a passerby reported it at 4:20 am. But in other instances, he said, “it could make a difference.”

The Northern Door Fire Departments have an automatic mutual aid agreement, in which all departments automatically respond to a structure fire in any other department’s district. Manpower shortages make the cooperation a necessity, but the most important part of the agreement is the supply of water. 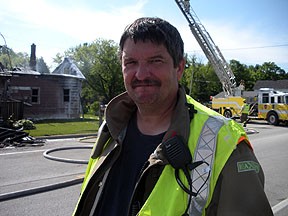 Egg Harbor Fire Chief Steve Schopf on the scene of the Roadhouse fire. Compressed air foam covers part of the roadhouse behind him.

“Hauling water is a very large part of what we do, especially what we do for each other,” said Sister Bay/ Liberty Grove Fire Chief Chris Hecht. “We’re sort of a very large bucket brigade.”

“If we don’t have water, there’s not much we can do no matter how great your trucks are or how well trained your people are,” Schopf said. “That’s what we have the automatic mutual aid for, the water delivery. With a big exterior attack on a fire you can go through a lot of water.”

In an area where fire hydrants don’t exist, Hecht said departments learn to fight blazes differently than an urban department.

“People ask why we need these big fire stations with all these trucks when a city firehouse may only have two or three,” Hecht said. “Well, water is a big part of that. They have access to water in fire hydrants. We have to take our water with us.”

In Northern Door, only Sister Bay and a small portion of Liberty Grove have fire hydrants. The need to transport water, and get it from hard-to-access places, requires different types of equipment, including more tankers and pumper trucks.

At the Roadhouse fire witnesses saw what looked like a big yellow kiddie pool full of water in the middle of the highway. That’s where tanker trucks dumped water for the attack trucks to draw from, allowing the tankers to head back out to fill sites to reload.

By the time that fire was contained, tankers had made more than 50 runs to three fill sites – one at a hydrant near the old K-Mart building in Sturgeon Bay, one at Logan Creek, and another on Bay Shore Drive – to supply the estimated 110,000 gallons of water used to fight the fire.

Tanker trucks, on average, carry 2,000 gallons of water, while attack engines carry anywhere from 500 to 1,000 gallons. That supply doesn’t last long when a truck like Sister Bay’s new aerial ladder truck can pump 1,500 gallons per minute.

“Ideally you have enough tankers running that the attack engines never run out of water,” said Schopf, a 30-year veteran of the department. “[The Roadhouse] had the most tankers I can remember seeing at a single fire, but you’re emptying the tank just as fast as you’re filling it. It was a little bit of an education process for us.”

Firefighting advances are helping departments offset water shortages. Many of the new engines and trucks being purchased by Door County fire departments feature compressed air foam systems. Such systems add water and compressed air to a detergent to make suds that adhere to walls and ceilings to douse flames and reduce heat. The foam absorbs more heat and gives six times the fire suppression of water.

This helps conserve water and buy time for tankers to transport more to a scene.

Despite the advances, Hecht said the best firefighting is still done the old-fashioned way, through preparation and prevention such as quality construction, alarm systems and sprinklers.

The 106-year-old Roadhouse had no alarm systems, no sprinklers, and no firewalls to slow the blaze. Once the fire took hold the wooden structure had little chance, water supply or not.