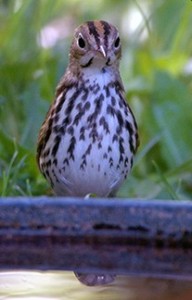 An Ovenbird contemplates taking a drink or a bath.

A secretive, small, sparrow-sized bird leaves people mystified throughout late May and most of June. Judging by the carrying power of its easily recognizable song, one would assume it is a considerably larger bird. Upon hearing the bird’s name, an even greater degree of mystery enters the picture, especially in this “microwave oven” era. Why in the world would anyone have given this loud-singing, difficult-to-see, woodland recluse the name of “Ovenbird?”

It never fails at this time of the year that we introduce some of our friends to this wonderful song for the first time. Fortunately the 22-acre wooded area that we own, and in which our home is built, is surrounded by at least another 100 acres of woods, a sufficiently large enough area for the required habitat of this so-called aberrant warbler species that inhabits the forest floor.

Invariably it is through pure accident that one discovers the nest of the Ovenbird. Our retired friend of many years ago, Jack Rudolph, had exceptionally keen awareness in the outdoors and it was he who came upon several of their nests while searching for lost golf balls along the edge of one of the wooded fairways at the Peninsula State Park golf course.

The female Ovenbird incubates the eggs, and she is known to sit extremely “tight” in her nest, allowing walkers to practically step on it before she will fly away. As the tiny bird escapes from danger she often flutters along the ground dragging her wings, a distraction display as wonderful as that of the Killdeer.

The outside diameter of the domed-over nest is about 6½ inches and has an inside diameter of three inches. It is a rather bulky nest, constructed of dried leaves, coarse grasses, weed stalks, and perhaps pine needles if pine trees are nearby.

As I carefully approached the nest with my camera and long telephoto lens, she peeked at me through the small side opening of her exquisitely built, old-fashioned Dutch oven-style nest. What a perfect name for this classy woodland warbler, which resembles a miniature Wood Thrush. Its name becomes especially meaningful for those lucky few who have been privileged to see the nest.

It is the bird’s song, however, that might lead some people to nickname the creature the “teacher bird.” How resoundingly its song reaches you from the woods. It starts rather softly and builds quickly to a ringing staccato crescendo, “teacher, TEAcher, TEAcher, TEACHER. Small schoolchildren, learning about birds with me and their teachers in the woods in past years, took an immediate liking to the “teacher bird.” Undoubtedly they remembered that name more readily than the “Ovenbird.”

Experts in the field of electronic recording have determined that an Ovenbird actually sings a continuous note of changing pitch with such incredibly short pauses, if any, between what appear to be singular notes or syllables, that the human ear cannot detect them.

My old Uher (German-made) field tape recorder, with which I used a parabolic reflector-microphone to considerably amplify the sounds, enables me to record bird songs at 7½ inches of tape per second and replay the song, gradually lowering it down octave by octave to ¾-inch per second. This lowers the song’s speed as well, allowing one to hear the fantastic intricacies of this bird’s song and other sounds of nature.

There is no question in my mind that the Ovenbird population is steadily diminishing throughout much of the state as the woodlands are “checker-boarded” by development into smaller lots laced with homes, black-topped driveways, tennis courts, etc. These tiny ground-nesting birds need large contiguous expanses of woods and their nests are being more heavily parasitized, especially by the Brown-headed Cowbirds that thrive in the steadily increasing miles of “edge” created by the checker-boarding of development. 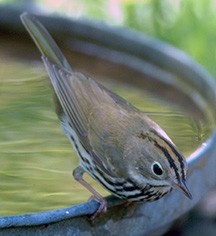 This view shows the dark stripes on the Ovenbird’s crown with pale orange-brown in the center.

Not only are we seeing more Brown-headed Cowbirds (Charlotte calls them Brown-headed Cowards!), but we are also noticing, among others, more and more Raccoons, Blue Jays and Opossums, all of which are natural predators of many wild creatures, including birds. The preferred habitats of these predators are the man-made edges!

The warming weather during late May and into early June brings the warbler migrants into and through the state. Unfortunately, this welcome and pleasant weather also lures people into washing their picture windows, which, in turn, act like huge outdoor mirrors. Among the birds most frequently killed by flying against these shiny, hard, reflected “landscapes” is the Ovenbird. Many also lose their lives by flying into tall structures, including TV and radio antennae, and skyscrapers in cities.

Most Ovenbirds migrate to the tropics for the winter, stretching from the West Indies and Mexico into northern South America, arriving from much of the eastern two-thirds of the United States and Canada. Having captured a number of them during bird-banding studies in the past, I have always admired these gentle, comparatively long-legged thrush-like birds.

Their large beady brown eyes are well-suited to capturing slugs, worms, beetles, snails, spiders, aphids, ants and caterpillars on the dimly lighted forest floor. A pale orange crown-patch bordered with black has led to the nickname “golden-crowned thrush.” The sides of its throat, flanks and breast, streaked with black, do resemble the markings of some thrushes. I think the light-colored “spectacles,” or eye rings, of the little oven-builder add considerably to its handsome plumage.

One of the most exciting bird experiences I’ve had happened last summer while sitting in my photographing blind waiting for birds to arrive. Suddenly an Ovenbird landed near the edge of the water bath no more than 10 feet from where I was crouched in my blind. Within seconds after landing, the Ovenbird decided to gradually walk toward the blind for a closer look. Not once, as I took one picture after another, did the bird as much as flinch – the perfect model!

Mysteries in nature as simple as they may be, not only add interest to daily hikes in the woods, but also serve as constant reminders of the endless learning that can be yours day after day, year after year. The Ovenbird suggests, over and over, that you can and should be your own very best TEAcher, TEAcher, TEAcher!