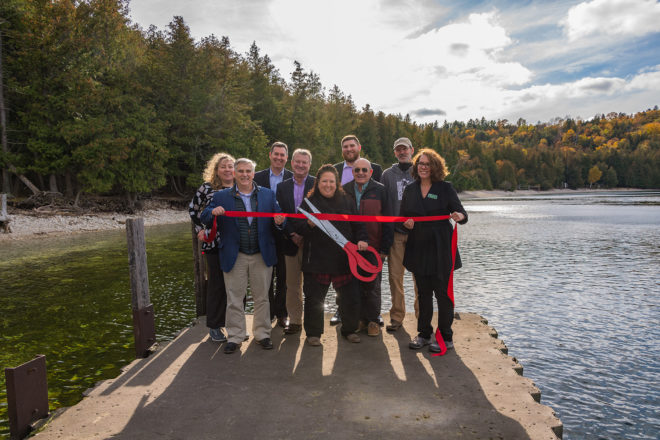 The Village of Sister Bay, the Door County Land Trust and NOAA worked together to raise $2.4 million to preserve 600 feet of shoreline and 17 acres of forest on the revered property.

“On behalf of the governor, I want to thank all of you who have played a part in preserving this property,” Brennan said. He also praised the late Fred Luber, whose family has owned the property for generations.

“Fred Luber was a mentor to me and a large influence and had a tremendous impact on the world around him,” Brennan said. “He and his family continue to have a legacy and impact.”

He also praised Kitchens as a great partner in Madison in representing the preservation goals of Door County. Kitchens used the opportunity to advocate for the continued support of the Knowles Nelson Stewardship Fund because the village will apply to the fund to support its portion of the purchase.

“Normally it gets renewed for 10 years, but we only got it renewed for two years,” Kitchen said. “We need to keep working at that, and whenever you have a chance to influence someone’s opinion on that, please do.”

Kitchens said Door County is in a distinctive position to advocate for receiving the program’s funds because of communities such as Sister Bay that are willing to invest matching funds.

“Today is another reminder of the special place we live in,” he said. “Not only is Door County one of the most beautiful places in the country, but it’s the people [who] make it so special because not only do our citizens appreciate this wonderful beauty here, but they’re willing to step up and make it happen to preserve this.”