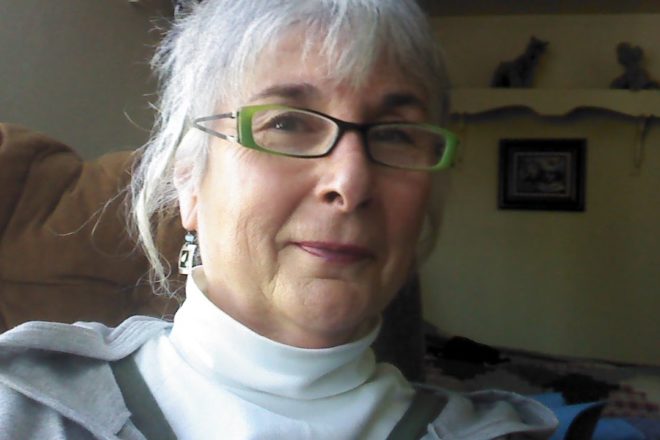 Jami Hanreddy was a language arts/English teacher for most of her career and authored several books for English Language Learners, one of which is now in its seventh edition.

Before retiring to northern Door County in 2010, Hanreddy taught students to find their own voices in their writing, but she had not given much time to finding her own. It took a few more years – and encouragement from Estella Lauter and Max Garland, former Door County and state poets laureate, respectively – to believe poetry might be the vehicle she needed to explore the “vast reaches of mind and spirit.”

Hanreddy lives in an interspecies household in Gills Rock and wonders at the life she is privileged to lead with her companions near Death’s Door.

I used to get up very early every morning to write. Maybe from 5 to 8 in the morning. Then walk the dogs and eat breakfast and do it all again the next day. But we got another puppy last fall, and if I stirred, then she stirred – and you know what that means with a puppy, right? But she’s nine months old now, and she’s learned from our older dog that sleeping in is a good thing, so I think I’ll be able to revive that routine soon.

Perhaps if it touches or tickles the intended audience in some way, then for me, it’s done its job. And that audience, of course, may be only a few or it may work for a great number of people. But, of course, as an English teacher, I did guide my students to look at specific things in poems that made them beautiful, profound, amusing, that touched on human foibles as well as heroism, on absurdity and paradox, as well as just the sheer music of language.

Well, I’m picky about punctuation and phrasing used meaningfully in order to fulfill an author’s intent. If certain punctuation and line breaks make you misconstrue the message, then that’s very distracting. But these things are easily cleaned up with the help of feedback from your writing group or a friend. What’s really hard to fix is vacuity, a poem without heart or depth of feeling or humility.

Not always. There are some poems that you can just let wash over you. You can let your intellect rest for a bit and just savor the music, the rhythm, the heart-stopping punch line.

But I personally get bored by poem after poem that only the author understands. I am not in favor of elitist, Joycean jokes that alienate a large swath of people for whom poetry has become something to avoid.

Why can’t a poem be straightforward and beautiful, full of profound ideas and masterful metaphors to which we all can relate? Of course, Amanda Gorman has set a new bar for just that in her recent reading at the inauguration last January.

I recently finished Homeland Elegies by Ayad Akhtar. It’s a fascinating read if you truly want to understand a variety of perspectives you might not have been unaware of before. But I definitely recommend first reading his other novel, American Dervish – a Door County Read selection that was very well received here a few years ago – and also his Pulitzer Prize-winning play, Disgraced, for some context before tackling Homeland Elegies.