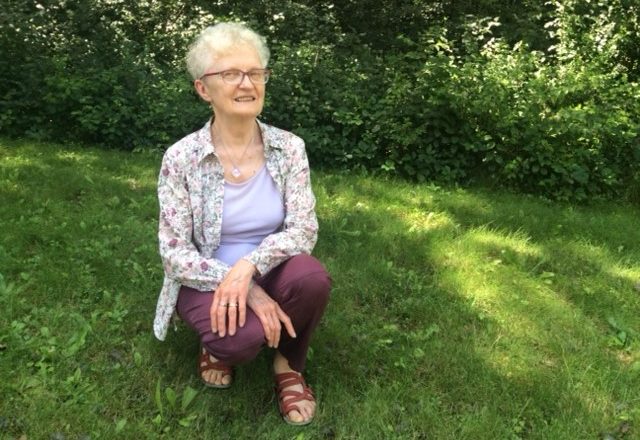 Our April Peninsula Poetry author is June Nirschl of Baileys Harbor. What strikes her poetic fancy are the ironies and contradictions in life. In looking back over a lifetime (always in Wisconsin), she is amazed by the stories each of us has carved out. Chasing variety accounts in part for her leaving secondary education post-motherhood and choosing municipal work.

Nirschl co-authored Slightly Off Q with fellow poets Judy Roy and Nancy Rafal. In 2009, the Wisconsin Library Association recognized Two Off Q, a collaboration with Roy, for outstanding achievement in poetry. Before & After, Nirschl’s first solo book, was published in 2014.

Her poem “The Fall” received the Wisconsin Writers Association’s Jade Ring Award in 2005, and she earned first prize in the Peninsula Pulse’s 2008 Hal Prize contest (judged by Ellen Kort) for “In a Breath.”

There was no way to escape the fall. It won’t leave
me alone. How could it happen? One moment
a careful walk on the graveled shoulder of the road;
the next, wingless flight, arms extended in desperation,
hoping to be saved. Might Eve, slipping by invitation,
have sensed her fall in just this way, like mine?
And the burden she carried, perhaps a bunch
of wild flowers picked in the early morning’s
stroll with Adam through the Garden, two or three figs,
large and sweet, a palm frond to tangle in the Tigris?

Might she have flung them all as I did, two dozen
fresh eggs, cushioned by grassy ditch, purse and bag
of books, scattered on the road, gravel slicing
through palm, bones and muscles slammed so hard
against the gravel I could not hope for forgiveness?
Did her fall send repercussions in all directions,
scalding rays of sun to shrivel flesh, a gust of dirt-filled
wind to blind her eyes, the sudden pain of knowledge?

At the moment of her fall, did a scream escape her throat,
as if it could stop the fall, pull her upright once more?
Like me, struck with the improbability of such disaster,
though up to the instant it happened I was in full control.
We are sisters across the hard lines of time and sin,
propelled by forces lying at our center, which move even
as the tides and curl around an ankle as readily as a soul.

Light is now her dim companion, casts lengthening shadows
on her diminished frame. She sees as by moonlight, shrouded
silhouettes. Through her fingers, the mystery of an inner light
as she untangles yarn the children of her children’s children
have unwound.
Her fingers plumb the fiber, follow it through twists and turns,
undoing frequent knots. And in the waning light of afternoon,
she reaches the beginning of the strand.

It is winter, and the sky is overcast,
but the room is filled with light.

We marvel as she nears the end; generations stop sentences to stare,
for she has done without sight what none of us had dared.
She has taken what was handed her and let the task itself
determine course. Dismissing what she accomplished with
what else have I to do, she sits serene on a dining room chair.
The wayward yarn’s now neatly wound, once more a sphere,
alive with possibility. She holds it like the world.

Though it is winter, and the sky is overcast,
the room is filled with light.