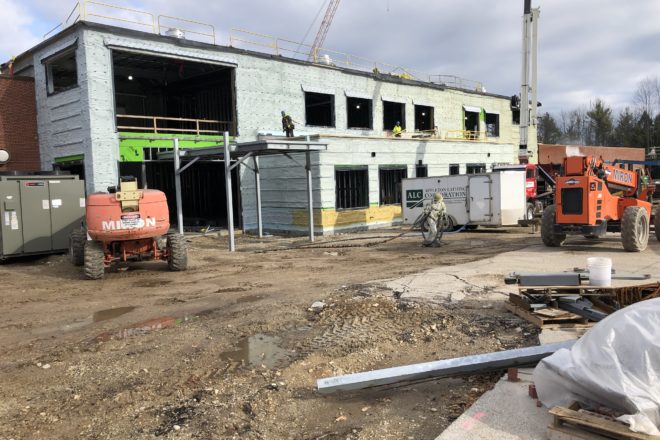 Contractors have built most of the exterior walls and roofs for the $25.1 million addition to the preschool-through-12th-grade school in Institute and hope to have windows and temporary barriers up by January so they can heat the indoor work space. Voters overwhelmingly approved a referendum for the construction, which was forecast to cost an additional $240 per year for an owner of a property assessed at $200,000.

Newest Door County school addition not quite sewn up for winter

The Sevastopol School District’s 600 students will enter buildings next fall that could be called “amazing,” rather than “a maze.”

At this stage of the construction, however, the two-story building addition is still being puzzled together by construction managers. Architects had to design the addition with hallways that attach at four levels to the existing school buildings, which currently rise from five levels. That has added to the challenge for construction workers – especially masons who are putting together block walls.

“There are different levels, but what you’ve got to watch out for is the elevation,” said Jeremy Paholke, construction civil superintendent for Miron Construction of Neenah. Ideally, the top of the blocks, when assembled from ground level, would line up perfectly with those in the adjacent building.

“The second floor [had to be] built to kind of a funny number; it’s not a mason-friendly number,” Paholke said. “What I mean by that is the mason has to cut block down. We had to go to that number because you have to match to come into the other buildings.”

The bricklayers’ challenge is part of the $25.1 million, 80,000-square-foot addition that will replace some of the most confusing and troublesome portions of the school facility, part of which dates to 1924.

Next year, for example, instead of having a library that partially occupies a part of the school built in 1965 and a portion built in 1996, Sevastopol will have two spacious, sunlit libraries: one for high school students and the other for elementary school students.

Many rooms will have garage-door-like dividers that teachers and staff members can open to allow for group activities. Construction crews have finished framing the openings for overhead doors that can open between elementary and high school art rooms, which have a shared display area, supply room and kiln. When teachers in two third-grade class sections, or the kindergarten and first grade, want students to work together on a project or activity, they can simply open a door.

Masons have constructed the shell for a two-level tool room in the center of the industrial-arts section, which will feature an agriculture classroom area, a greenhouse and a large, new metal shop. Instructors will be able to simultaneously observe students in the shop area and those in a central, shared computer lab. A $2 million donation from Therma-Tron-X of Sturgeon Bay provided a major boost to the district’s job-training programs.

“We’re going to have the best shop around,” said Superintendent Kyle Luedtke, who called the current industrial-arts facilities “awful.”

The addition also includes a math and science wing and two new elevators, which bring the school’s total to three and allow the district to better meet Americans with Disability Act requirements.

Also, the existing buildings have winding, confusing and sometimes dim hallways, but the addition includes wide hallways and a large skylight above the multipurpose room.

“There’s something in this building for every age group,” Luedtke said.

In addition, Miron constructed two sections of the building so they could support additional stories and an additional 17,000 square feet of classroom space if the district experiences major growth in the future.