The 2013 Door County Half Iron Triathlon set a new record when it reached its 1,000 participant capacity on Jan. 28, less than one month after opening for registration. 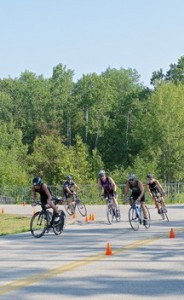 Event Director Sean Ryan says there are two very good reasons why the event, now in its 9th year, continues to sell out faster every year.

“One is the solid operational planning and execution of myself and the team and all the volunteers. Basically, we collectively put on a great event,” Ryan said. “The second ingredient is, what better venue to take the family to do an event than Door County in July? Those two factors make us a pretty alluring event. I think that’s what’s driven the reputation of the event and caused us to sell out faster each year. That’s what keeps the participants coming back year after year. It’s a great place to be and it’s a great event.”

Even, he adds, with eight races under their collective belt.

Ryan said he and his team try to anticipate everything in order to have a safe event.

“I’ve seen a lot of races, but I can’t say I’ve seen any race that takes the extraordinary measures that we do, such as delineating the course to make it clear and comprehensible,” he said. Forty-five buoys mark the 1.2-mile swim course at Frank E. Murphy County Park on Horseshoe Bay.

“And then the sheer manpower in terms of lifeguards and safety personnel along our swim course route, I’d say it’s unparalleled,” Ryan said, mentioning that the Triathlon’s director of lifeguards is Mary Heimann, aquatics director of the Door County YMCA.

“All of my lifeguards are certified and almost all of them are open-water certified,” Heimann said. “I also offer three open-water trainings prior to the event. They have to attend two out of three, and I encourage them to attend all three.”

She said for the 550-yard short course swim on Saturday she’ll have as many as 28 lifeguards on duty and 30 on Sunday for the 1.2-mile swim. There will also be five to seven jet skis with lifeguards on the back, and two of those with evacuation sleds, six lifeguards on rescue boards, two pontoon boats manned by lifeguards, and more lifeguards in the water along the course.

“When the athletes look out there, they can see the amount of planning and thought that goes into it,” Ryan said. “If that’s not enough, we’ve got a Coast Guard crew on a Zodiac keeping sentry to keep recreational watercraft at bay. The athletes tell me we’ve put a lot more thought into that than other races.”

The event has to meet certain minimum safety standards in order to be insured by USA Triathlon, but Ryan says, “They’re kind of laughable because we are far, far above the minimum standards in terms of number of lifeguards in the water related to the number of swimmers in the water. The extraordinary measures we take are impressive. I’ve been asked many times to share our swim safety plan with other races. Racers have said they’ve never felt safer from the water at these events than they do at Door County. They know that we’re doing it right.”

Ryan says Murphy Park is the best vantage point on both days, however, between 8 and 10 am Sunday, you might want to find a choice spot on 3rd Avenue in downtown Sturgeon Bay to catch the cyclists whizzing by, and downtown Egg Harbor by Shipwrecked Restaurant from 11 am until 3 pm will be the best view for runners.

“They can see runners going two ways. It’s mile 7, and it’s pretty impressive to see them at that point of the race,” Ryan said.

He adds that you should not discount the view a volunteer has.