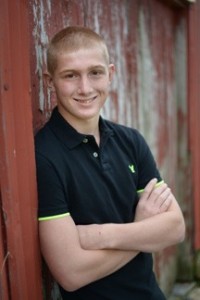 Jacob Englebert is currently ranked second in the state in his weight class.

Do you play other sports? Cross country and track

Do you prefer playing team or individual sports? Why? Individual sports because everything’s on you, and you can work as hard as you want to get better…you get out of it, everything you put in.

What’s your pre-game ritual? Nothing too exciting – watching the other matches, getting stretched out and loose.

What’s your favorite warm-up song? “The Final Countdown” by Europe

What’s been your greatest sports moment so far? Probably winning the Oshkosh on the Water Wrestling Invite at Oshkosh Lourdes.

What’s been the worst? Last year I got a concussion four or five days before regionals. I didn’t get cleared to do anything until June.

Is there an athlete – or anyone else – who inspires you? Wrestlers Dennis Hall and Ben Askren

What do you like about wrestling? It’s one of the toughest sports, and I like learning the physical and mental aspects of it. It’s pretty black and white, you’re either better than him or you’re not; it’s not too complicated, there aren’t a lot of judgment calls.

What’s your favorite sports team to watch? I love watching the Packers.