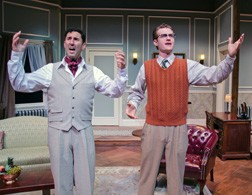 (Left to right) Sean Fortunato and Matt Holzfeind in “Lend Me A Tenor.” Photo by Bruce Mielke.

Peninsula Players Theatre, in conjunction with its production of Ken Ludwig’s hilarious comedy Lend Me A Tenor, will host Peninsula Music Festival sopranos Kathy Pyeatt and Danielle Buonaiuto on Aug. 13 at 6:30 pm. Buonaiuto and Pyeatt will speak about the path that led them to opera and their lives as professional opera singers. Ludwig’s comedy features a fictional opera singer, international superstar Tito Merelli, who is to give a special sold-out performance of Verdi’s Otello in Cleveland, Ohio in the 1930s. Chaos builds to an operatic frenzy when Tito passes out prior to opening curtain. Buonaiuto and Pyeatt will perform “Don Giovanni’s Return” with the Peninsula Music Festival (PMF) on Aug. 15. For more information visit musicfestival.com or call 920.854.4060.

Lend Me a Tenor is performing at the Players through Aug. 16. Tickets to performances are available; admission to the pre-show seminar is free. Call 920.868.3287 for more information on free seminars, tours or to purchase tickets.