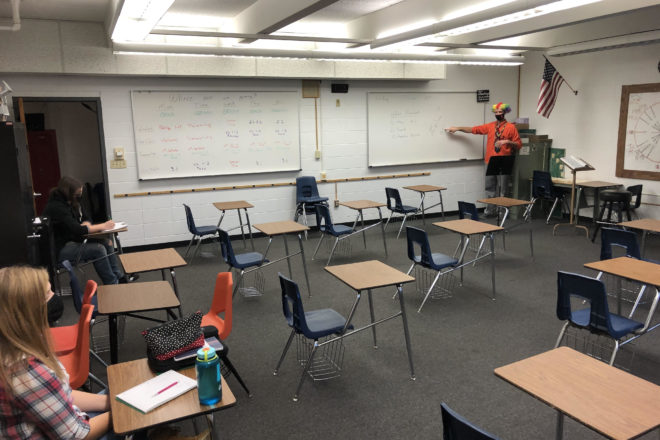 Math teacher Kyle Schleis, who was dressed up in the Halloween and Homecoming spirit, teaches to three students in person and additional students via Google Classroom. The district was making room this week to bring 25 high school students back who were scheduled to participate from home but who had no or inadequate internet service. Photo by Craig Sterrett.

District administrators knew after surveying parents this summer that 18 percent of families, or 25 students, did not have adequate – or any – internet services, according to Sevastopol Superintendent Kyle Luedtke. The district had prepared for this by purchasing 30 Wi-Fi hotspots for internet-deficient households. It was then the student’s and family’s responsibility to find a spot with Wi-Fi access or a location where the hotspot would work.

But Luedtke cited numerous problems associated with the poor connectivity issues. Sometimes a student’s face did not appear on the teacher’s screen so the teacher did not know whether the student was still watching or had access. Some students lost connectivity and got dropped from lessons. Still others fell behind and needed more face-to-face time with teachers.

To solve those issues, the district has allowed, as of Nov. 2, the students with no or unsuitable internet service to be in school in person each Monday, Tuesday, Thursday and Friday. Wednesday is reserved for students who have fallen behind and those who are taking college-level or advanced-placement classes. If there’s extra space in a classroom on their off days, they may spend that period in class. If not, they will spend those off days studying independently in a remote, online setup in the library.

Districtwide, two halves of the student body attend school in person two days each week and have remote classes two days per week. That won’t change at the grade school and middle school levels.

Principal Adam Baier said that up to 20 of the approximately 25 students without suitable internet service can find seats in most of the classrooms each day, and those who are keeping up with their studies may be in the library with online access for the day instead of getting a classroom seat.

The high school initially had an every-other-day “hybrid” model, but earlier this year, the board approved a full-attendance model. With that model, district officials had to temporarily remove eight to 12 students who had been sitting near a student who had become infected.

“Unfortunately, we had some cases in our school,” Baier said. “Students who had close contact [within six feet of the infected student] for more than 15 minutes, they had to go into quarantine.”

The district has come up with classroom-attendance capacities for safe social distancing, and now it has extra room each day for the returning students.

“We have approximately 180 kids in our high school,” Baier said. “Of those, we have families who chose to go 100 percent virtual. That’s about 10 percent of our kids, or about 20 students.”

Baier said that ideally, all of the students could be in school and participating in activities, but the district needs to keep making improvements while also keeping students safe.

“There’s been a lot of flexibility from our community and our parents and students to get us where we are,” Baier said. “We’ve had three different instructional models, and as we went through those models, we realized there is room for improvement, especially at the high school level.”

Luedtke noted that rural schools nationwide are having the same problems with online access, and that staff members and teachers keep trying to improve the situation in Sevastopol.

“We’ve had three models as far as access to education, and we’re starting No. 4,” Luedtke said. “We’re making an adjustment, trying to get better. And it may not be our final model. It doesn’t look like COVID is going to go away anytime soon.”