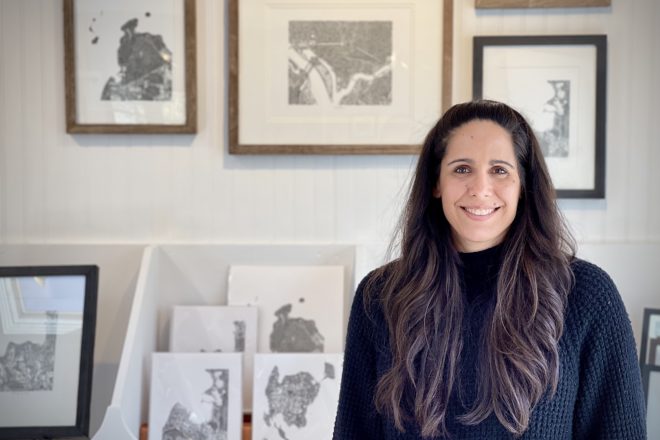 Nestled in a quiet corner of Ellison Bay on Highway 42 and Lakeview Road, a collective of artistic energy has been building. One wall of the Northern Door Arts Collective is a gallery space with originals by local and Midwestern artists. Another contains small, colorful wooden blocks with the names, photos and Instagram handles of those featured artists printed on them. Yet another wall features prints, hanging above a table laden with art supplies, and standing out among them are the exquisitely detailed, hand-drawn maps created by Sophie Parr, the collective’s founder.

Parr pursued a master’s degree in urban planning in Chicago, and shortly after, she became the director of planning at the transit authority in Duluth. While there, she used mapping software to create digital maps for trails and worked with some Door County organizations as well: a property map for American Players Theatre (now Northern Sky Theater), and the map for Edge of Park in Fish Creek. Maps had always been a fascination for Parr, and although they were a large part of her work as an urban planner, she started thinking about creating map art in her free time when she moved to Madison.

“Making digital maps is fun, but when I started the hand-drawn maps, it was a merging of all of my interests into this creative outlet,” Parr said. “It just sort of made sense.”

She drew her first map in 2019 while on a family vacation. Then she made another, and another. Eventually people started asking her to make maps for them.

Some of the maps on display at the collective are familiar sights in Door County: Peninsula State Park, Washington Island, Baileys Harbor. But others are harder to identify at first glance.

“Everyone expects Fish Creek, but no one expects Sheboygan,” Parr said.

Her favorite maps are the ones that elicit a response from the viewer.

“Place is such an important part of who we are,” she said, “and maps help you visualize that. Whether it’s where you grew up, or went to school, or where your grandparents lived, you can see things that stir those memories.”

Creating a hand-drawn map is a multi-step process. Parr uses Google Maps to make an initial screen grab of an area she’d like to map, then places that image on a grid. Once the grid is laid out, she traces the borders, rivers and roads for accuracy, then jumps into inks for everything else, which creates a very organic feeling. For Parr, not everything needs to be 100% precise, and making the details more abstract is fun. That approach makes each map one of a kind.

When she works on a scale where she can be more accurate, Parr is able to surprise her audience.

Even the smallest maps require an immense amount of time and effort, but Parr enjoys putting in the hard work when she knows the results will pay off. Creating a large area of trees, for instance, is methodical, but cathartic work. Although she doesn’t feel as though she “gets in the zone” while making a map – she never loses herself to the work – she is the type of person who can work on a project for five hours straight. That work ethic is doubly true as a project nears completion.

“When the end is in sight, I can go all night long,” Parr said.

She had just begun showing her maps when art shows were canceled in 2020, so she focused on social media instead. Parr began connecting with more and more artists on Instagram, and this year an opportunity arose to return to Door County and open a gallery of her own in Ellison Bay.

She wanted to take the initiative to make it happen for herself, but she knew she couldn’t do it alone. Parr needed other artists to launch the space, so she turned to the community she had found online.

It was an easy pitch: “Who wouldn’t want a space in Door County to show your work?” Parr asked.

The Northern Door Arts Collective is split into sections: half of the gallery contains original art, and half displays prints.

“Not everyone has the disposable income to buy art, but we all have artists we love, and printmaking is becoming so much more accessible,” Parr said.

The decision to offer a selection of art supplies alongside the prints and originals sends a message: This is a place for all enthusiasts, collectors and beginning artists. Parr hopes to hold classes and workshops at the space soon, solidifying the collective as a place to nurture all artists.

As many things we interact with become digitized, the physical takes on a new importance. The majority of music consumption is now digital, for example, yet there has been a vinyl resurgence. Parr’s work holds a similar importance and attraction: We interact with maps regularly, but we rarely use physical maps for navigation anymore. Now the physical map serves a new purpose: It captures our memories.

“It’s sad how much our world changes, and we just forget about it,” Parr said. “I can start capturing things as they are today so in 20 years, you can look back and say, ‘Oh, this is what it used to look like.’”