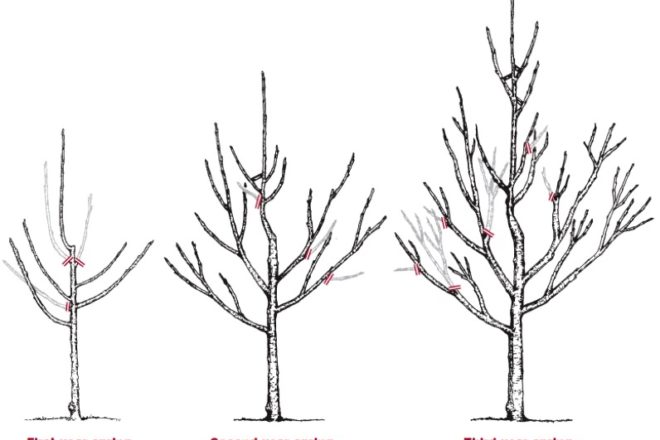 An example of pruning a tree that is trained using the central leader system. Figure credit: learningstore.uwex.edu/assets/pdfs/A3639.pdf.

Pruning is one of the most critical management practices when growing a fruit tree. March and April are the best months to prune fruit trees in Wisconsin. At this time, the tree hasn’t come out of dormancy, but it isn’t cold enough that you will get frostbite while out pruning. Pruning at this time will also decrease the chance of disease infection at the wound, expedite healing, and make it easier to see the branches without having leaves in the way.

Pruning should begin from the moment the tree is planted and continue throughout its lifetime.

Apple trees are often trained using a central leader system where there is a strong central trunk with spaced scaffold branches along the trunk (think Christmas tree-shaped). While there are other systems that are used, this structure is easy to manage and allows for optimum fruit production. The shape is maintained by yearly pruning.

Additionally, pruning is important to promote tree health and fruit quality. Many insects and diseases thrive in humid environments, so the more air flow you have through the tree canopy, the faster the leaves will dry out and the less likely you will run into issues. Also, sunlight is needed for quality fruit, so it is important to allow for light penetration through the tree.

Another benefit of pruning is to balance fruit load. Many apple varieties are prone to biennial bearing where they produce an overabundance of fruit one year, and the next year they produce very little as they rebuild their energy supply. To help a tree balance out that cycle, pruning heavily before the overly abundant year can reduce that crop load and allow the tree to have the energy to produce fruit the following year.

Keep in mind that every pruning cut stimulates tree growth at that site. Carefully selecting fewer larger cuts is much more effective than making many small cuts. When determining which branches to take, focus on ones that have narrow crotch angles (attached to the trunk at less than a 30-degree angle) as those branches have weaker attachments and are more likely to break.

In early summer, cut off all water sprouts (vertical shoots coming out of the trunk or older branches) and suckers (sprouts coming up from the base of the tree). Performing this after bud break can help prevent re-growth. Damaged and diseased branches can be removed at any time throughout the summer.

Make sure all tools are sharp and clean. Only use shears that are meant for pruning trees. Rinsing pruning shears in a 10 percent bleach solution or a 70 percent alcohol solution can reduce the likelihood of spreading disease between cuts.

All cuts should be smooth and close; leave the branch collar, but not a stub (less than ½-inch of the branch) because it will result in new growth at the cut site. Pruning wound paints or coatings should not be used since they delay healing of the wound by keeping it moist.

Taming old, neglected fruit trees is often not possible and generally the best recommendation is to remove the tree and replant. If the tree appears to be structurally sound, techniques are available to attempt to restore the tree but it will take multiple years.