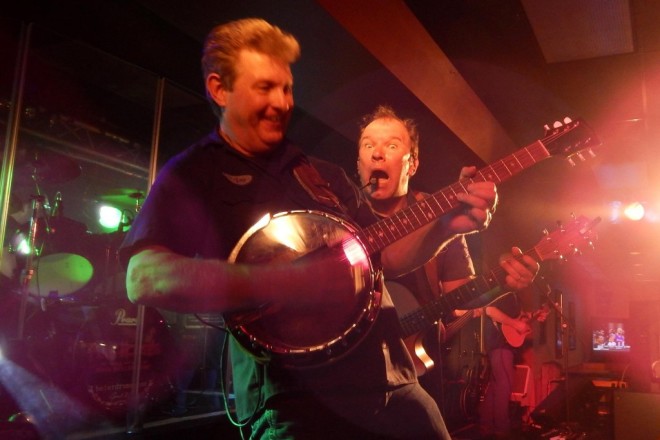 The Pink Houses during a 2014 performance at Badger Bowl. Submitted photo.

Though best known as the only John Mellencamp tribute band to have played the musician’s hometown of Seymour, Indiana (twice), Pink Houses will bring its other specialty – classic rock hits from the 1970s to today – to Stone Harbor Resort during Fire & Ice Festival weekend.

Under the leadership of vocalist/guitarist Tom Reitz, this 10-piece Southern Wisconsin live party band has been bringing its signature take on rocker John Mellencamp’s tunes to clubs and festivals since 2003.

“When I started the band, I was inspired by John Mellencamp and had his voice and started putting the band together,” Reitz said. “That band has played all over the Midwest to a lot of great big shows and big crowds, and at about year five we started throwing in other classic songs by lots of other artists so we could feature some of the other band members vocally.”

Four-part harmonies are a special focus of Pink Houses, who also include in their song list hits by artists such as Bon Jovi, The Eagles, Carrie Underwood, the Rolling Stones and Meatloaf, among others. The band’s instrumentation includes guitars, banjo, keyboard, fiddle, drums, bass and sax – all of the necessary components to covering the band’s countless musical influences from the past four decades.

But Pink Houses is more than just a cover and tribute band – it’s a high-energy dance band that shares its love of music by more than just performing.

“I’ve given away over 120 guitars at our shows,” Reitz said. “We do this through an air guitar contest and it’s typically with kids. Giving away a really good guitar to a child that wants to learn how to play guitar is really rewarding.

“You can get really fun audience participation, especially with the kids,” he added. “We’ve done it with adults too and the adults have a blast because who doesn’t like to air guitar? Then the crowd cheers for the person and we get it whittled down to two people. We have the crowd cheering and we have a decibel reader that says how loud the cheers are for each person. Whoever gets the loudest cheers gets to take home the guitar.”