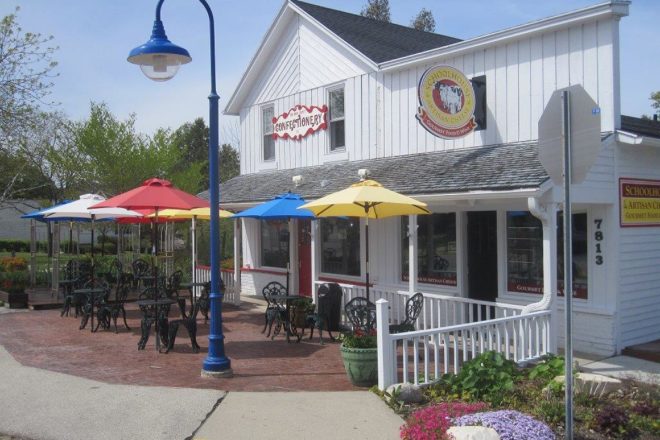 Schoolhouse Artisan Cheese has closed after six years in business.

The team at Schoolhouse Artisan Cheese is gearing up for its sixth season in downtown Egg Harbor and plans to celebrate with an expanded line of Wisconsin’s finest artisan cheeses. In addition to his existing collection of award-winning Wisconsin artisan cheeses, owner Michael Thomas plans to add at least 10 cheeses and five additional cheesemakers to his cheese case this season, in an effort to more widely represent the state’s booming artisan cheese industry.

The Schoolhouse cheesemongers will feature these new cheeses as they arrive in a new weekly summer pairing series, to be held each Wednesday afternoon, 2 – 5 pm. Stop by for free tastings and insight into new and exciting products every week, June through September. Their first pairing on June 1 will feature Burning Nettle Melange Gouda from Holland’s Family Cheese, a four-month-old Gouda-style cheese with bright, grassy flavors of stinging nettle, chives, celery, onion and garlic.

Schoolhouse Artisan Cheese will be open daily from 10 am to 5 pm, with extended hours on Fridays and Saturdays. For more information, visit schoolhouseartisancheese.com, and follow them on Facebook and Twitter.