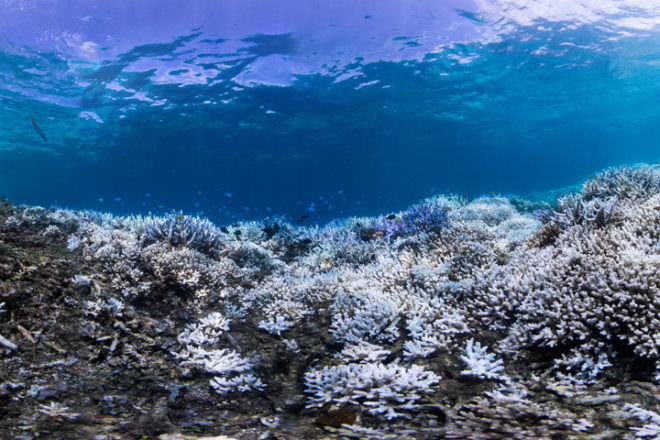 Ever heard the phrase “canary in a coal mine?” Years ago coal miners carried canaries into deep mines to alert them to dangerous levels of carbon monoxide. Canaries are much more sensitive than humans to the presence of insufficient oxygen or excessive carbon monoxide that could kill living things. Some scientists believe that dying beds of coral in the ocean represent a “canary-like” early warning, signaling that even slight increases in global temperatures have a deleterious effect on living things. Coral exists in shallow water, and when the temperature of this water layer increases a few degrees, large areas of multicolored coral begin dying. In parts of the Great Barrier Reef off Australia, 67 percent of the coral has died. The living part of coral consists of fleshy little polyps with tentacles that protrude through openings in the hard calcium carbonate that makes up the coral mass. Polyps vary in size depending on the species; some are only 1-3 mm long while others may reach 10 inches in length. Polyps derive their main source of nourishment from microscopic algae embedded in their surface. These algae help give corals their distinctive color. They are photosynthetic, meaning that they require carbon dioxide and sunlight to produce food molecules which provide about 90 percent of the foodstuffs used by polyps. In return, polyps provide algae with a nice place to live. There is a catch, however. When ocean temperature rises even a few degrees, polyps eject their algae. Without algae, coral polyps starve to death, leaving behind a colorless white wasteland of dead coral, as if it were bleached. Coral bleaching is turning out to be an ecological disaster, since coral reefs provide food and shelter for a quarter of all marine species. (oceanservice.noaa.gov/facts/coral_bleach.html; sciencemag.org, 2016, Mar. 29; marinebiology.org/coralbleaching; many other sources)