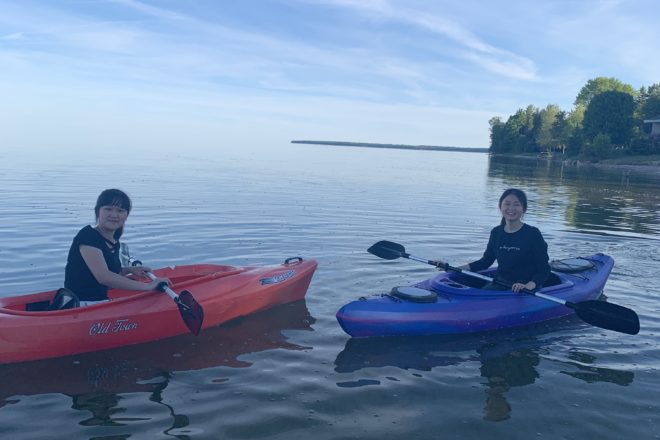 (From left) Cassie and Nico take to kayaking like pros. Photo by Maddy Schierl.

Even though I took a very traditional path to Door County – my dad grew up coming here to vacation; my family has vacationed here since I was a kid; and now I have a summer internship here – I still experienced what I thought was a culture shock in the transition from the suburbs of Chicago to Ellison Bay.

Then I realized that my experience of culture shock must be minimal compared to that of my roommates, Nico and Cassie, who are participants in the J-1 Visa Exchange Program, which provides international students with the opportunity to live and work in the United States for a summer to promote cultural exchange. Nico and Cassie, both from China, applied for the J-1 program with the goal of practicing their English and learning more about American culture.

This is their first time in America, but the initial language challenge was eased courtesy of their English studies in school. Sometimes they find idioms and colloquial phrases difficult to understand, though. When talking to Nico and Cassie, I often reexamine the phrases that I tend to overuse.

“I’ve noticed that people say ‘stuff’ a lot here – for everything,” Cassie pointed out. I’m guilty as charged of that vernacular vagueness.

In June, I invited Nico and Cassie to dinner at my family’s house in Baileys Harbor. I was a little worried that my four siblings, their three friends and my dog might be a little overwhelming to meet all at once, but they handled the chaos like champs.

Apparently, they are often offered burgers – the typical American “delicacy” – and my family was no different. Although burgers aren’t generally a favorite, there are some foods that Nico and Cassie are getting used to that they initially thought they wouldn’t enjoy. For Nico, Wild Tomato pizza and sweet-potato fries are quickly rising to the top of the list. For Cassie, pretzels – which were too salty at first – are now a favorite snack.

“I’m kind of falling in love with the food here,” she said.

Throughout the visit, I tried to show Nico and Cassie a classic Door County summer evening. We played bags, kayaked, made s’mores and played campfire games. Even though they don’t know how to swim, one of their goals for this summer is to learn, and they were naturals in the kayaks.

“I like the feeling of being in the water, but I can’t really go to the deeper water,” Nico said. “It’s new to me because we don’t really have lakes [back home]. At almost every beach she has visited, Nico has met a new person or family, and she appreciates when people take the time to introduce themselves.

Cassie was initially worried that Door County would be boring, but although it’s sometimes difficult to get to events with a bike as her only mode of transportation, she’s discovered more things to do the more she’s able to explore.

In general, the experience of hanging out with family and friends here in Door County is novel but enjoyable for Nico and Cassie.

“It’s totally new,” said Nico. “In China, we usually use TV or cellphones when we’re with friends. The life here is very relaxing. You play games with people and not with your phone.” Cassie added, “I like the atmosphere here.”

Although it would have required considerable adjustments to go from urban China to urban America, it seems like Door County is different well beyond just its rural nature. Even though I’m from only four hours away, much of what I appreciate about Door County (and am sometimes frustrated with) is exactly what Nico and Cassie appreciate. According to Cassie, her favorite aspects of living here are the scenery, the people and the food – my favorites, too.

It’s nice to be reminded through fresh perspectives that Door County is a special place for all of us. Yes, even when you’re from Chicago.