On Thursday we were all feeling rather tired after the plane ride from Milwaukee to LaGuardia. Our first impressions of New York City were heat and noise, but after we got settled into the church with our bags and had a tour and prayer, we went all around the neighborhood. It was interesting seeing all the diversity. You could hear multiple languages on the street and there were different shops selling saris and exotic fruits. It was completely different from quiet Wisconsin, and I enjoyed getting a glimpse into what actually goes on in Queens, New York. I really like seeing diversity and there were people from many different countries on the street, and it was amazing seeing all the cultures and the way people interacted with each other. ~ Kathryn Bartel 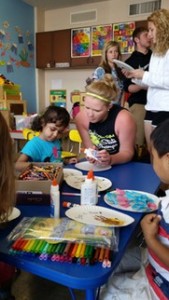 Friday consisted of many interesting events. One of my personal favorites was the vacation Bible school. During VBS, we first taught the children the story about Jesus’ birth. We did this by making crafts, which was making a cradle for baby Jesus. We also taught the children the song “B-I-B-L-E” and “In a Little Stable” which they enjoyed a lot. Last but not least, we had snacks that told a story with the frosting. It was truly an amazing first experience to see the children react so well to the story of Jesus’ birth. Later at night, we had the privilege to visit Times Square. Once again, Times Square was one of my personal favorites from the trip. In Times Square we had about an hour and a half, to shop at numerous stores. ~ MaCayla Moore 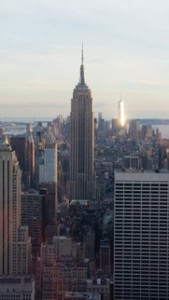 Saturday began with us helping Christ Lutheran put on a health fair for the community. We helped to promote the fair and we also ran activities for children, like face painting. After the health fair, we got to do a lot of fun things. I personally thought the best thing we did was the Rockefeller Center. I honestly didn’t really think that I was in New York, but when I got up there I got to see the beauty of how large and big it is. Then we walked around Manhattan at night, it was pretty amazing and beautiful! Overall it was the best day so far. ~Marie Prodell

On Sunday, June 14, we worshiped with Christ Lutheran church. The service consisted of three different languages: English, American Sign Language and Spanish. It was interesting to see the numerous cultural backgrounds that worshiped with us. As a gift, we purchased an iPad for the church in return for their great hospitality. After the church service, the congregation had a barbeque. Barbeques in Wisconsin usually entail barbequed ribs and chicken. Whereas here in New York, we had grilled sardines, Caribbean-style fish, lamb burgers, and more. It was fascinating interacting with members and learning about their home culture. We truly felt welcome and at home. To end the day, we finished up chores that we started while Pastor Jackson took a nap. ~ Lindsey Kirchman & Linsey Pierre

First to kick off the adventurous day, it all started with waking up before the cows came home. Waking up early on this trip was always a bit ruff like a dog, but it didn’t seem so bad to me. 6:25 am didn’t seem so bad today knowing that it was planned with fun extravaganzas. We started off the day with VBS where we made crafts, snacks, sang songs, and played games with the kids. Then, the clock struck 12:30 pm and we were off to the 9/11 memorial. Seeing this changed my life and made me proud to be a part of this amazing country. After searching for about twenty minutes, we found Ronald Bucca, a member of the Christ Lutheran Church who had died trying to do his job. After admiring the memorial, we went to a Chinese church, True Light Lutheran Church to lend a hand. This didn’t take long before we were off to cheer on the Mets as they beat the Blue Jays 4-3 in 11 innings. The worst part of the day, though, was saying good-bye to our good buddy Shawn, a member of our host church, after the game. ~ Dakota Berg & Mason Neuzil

When Tuesday morning arrived, it was the last day, but in my mind it was the best of all. Today we had our last day of visiting the kids for VBS where we taught them of Christ’s death and resurrection. It was amazing to see how much the kids were really learning and understanding the stories we shared about Christ. After some work, we left for the city. We visited the Metropolitan Museum of Art. I found it hard to believe that the art could have lasted hundreds, even thousands of years without withering. Everything was very beautiful and really took a person back in time. I know that I will look back at my New York memories and smile. ~ Anna Gottshall

This was the last day of our trip. We tied up any loose ends on our projects and chores at the church, and we walked around the church to discuss all that we had accomplished. We truly made an impact there by improving their facility, beautifying their grounds, and helping them reach out with the love of Jesus Christ to the community. We then made the flight to Milwaukee and the drive back to Algoma. As the trip ended, I was consumed with an overwhelming sense of pride and gratitude. I was proud of the young people of Kewaunee and Door County who had performed so well. They worked harder than any other service group I have taken. They met the multi-cultural climate of Queens with resilience: they tried many different kinds of foods, they were minorities for the first time in their lives, and they observed other religious services that occur in places like a Hindu temple, a Sikh Gurdwara, and an Islamic mosque. They gave me no disciplinary problems. And, I was thankful for the opportunity to serve Christ in Queens and serve these young people by leading them. ~ Pastor Christopher Jackson