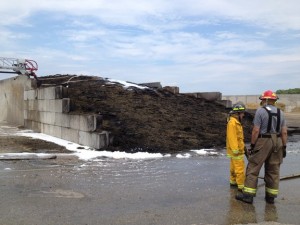 Egg Harbor firefighters clean up the aftermath of a June 8 silage fire at Schopf’s Hilltop Dairy. Photo by Matt Ledger.

Firefighters from Egg Harbor responded at 11:20 am on June 8 to a silage fire at Schopf’s Hilltop Dairy in the Town of Sturgeon Bay.

The fire overtook the surface of one of the three, 112,000 cubic ft. concrete bunkers that owner Dennis Schopf uses to store winter feed for his livestock. The fire consumed some of the feed and most of the plastic tarp and tires which covered it, spreading to one of the adjacent bunkers.

Assistant Egg Harbor Fire Chief Andy Staats says that the fire was knocked down within 10 to 15 minutes of his crew’s arrival and was extinguished within an hour. Tankers from every Northern Door Mutual Aid municipality responded to the fire, and the Jacksonport Fire Department set up a secondary tanker fill site at Logan’s Creek.

According to Staats, the cause of the fire is currently under investigation.

The fire resulted in no injuries to either people or livestock, so Schopf’s primary concern is the loss of feed. He says that 2,000 tons of feed, valued at $175,000, were stored in the bunkers. It’s unknown exactly how much of that was lost.

“The worst thing,” says Schopf, “is all the wire from the tires is in there now, and you can’t feed that to the cows.”

Schopf says that he will be bringing in a high-hoe scraper, and possibly a truck equipped with a salvage magnet, to get rid of the wire and dispose of the wasted feed. His insurance will cover the cost of the lost feed, tarp, and tires.

As for making it through the winter, Schopf says that his farm should be alright.

“We’ve got extra feed,” he says, “We’re selling it right now, although that might come to a halt.”