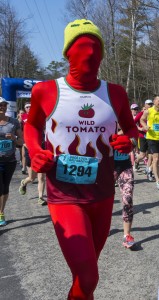 Jackson Parr running in an all-red getup in the 2015 Door County Half Marathon. Photo by Len Villano.

Sports have historically been a place for blaring national anthems, “Green-19s” and animated commentary. In a world of improved social networks and media consumption, it’s interesting that anything silent is catching on. But despite its name, silent sports are trendy.

More people are participating in marathons, bike races and ski events each year.

Silent sports are outdoor activities typically aerobic in nature. The idea is that you don’t need a team or a specific place to play. Simply go outside and enjoy.

Yet, as the sports’ popularity grows, it has become more social. Group bike rides and running trios have popped up. Running long is now boring without a friend or the latest podcast. This makes these sports much less silent. Now I like to call them participation sports.

This is partly due to their lack of spectator friendliness. While the Olympic Committee listened to a pitch on why triathlon should be included as an Olympic event, their only question was, how is this exciting to watch? Athletes speed by for 10 seconds before disappearing for hours.

Instead, these events inspire people on the sidelines to participate someday. Working moms and stay-at-home dads can train and line up on the same start line as the professionals. In silent sports, we can, in a sense, play catch with Aaron Rogers in Lambeau Field.

Since I began participating in running, biking and triathlon races across the country, I have always been curious about the demographic they attract. There is not a “one size fits all” personality or body type. I’ve been beat by a 60-year old on an equally antique Schwinn 10-speed and I’ve swapped energy gels with a mother of three who never ran a day in her life.

While I race, I’ve always kept some reserves for the people that are watching from the side of the road. I have run races in various costumes and often stop to enjoy the aid station of beer set up by groups that bring tailgating wherever they go. In doing that, I hope spectators that see me will think, “If he is wearing that costume and smiling the whole time, I could at least finish.”

In this column, I will explore all angles of silent sports training, racing, nutrition and more to give you tools you can use to lace up some shoes, go outside and participate.