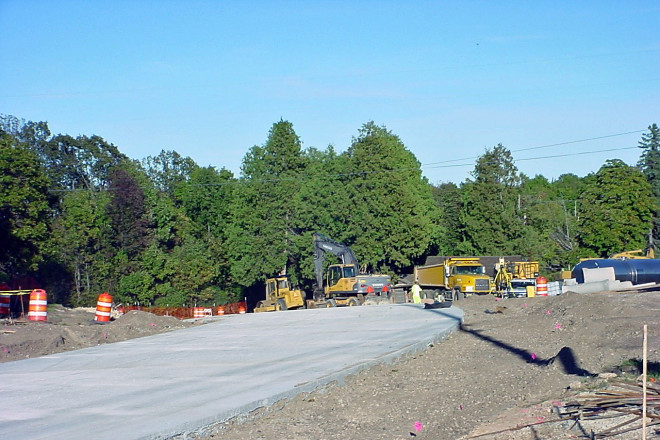 Sister Bay is tentatively a “war zone” as Jane Kayser from Domicile put it. But every Friday, work crews lay down asphalt over the massive holes they have blasted in the highway and open the road as if the only work they did was patching a few potholes. The village stops construction on the highway downtown and that has been instrumental in keeping businesses above water.

“It hasn’t affected business too much,” said Justin Anderson at Drink Coffee in downtown Sister Bay. “I’m kind of surprised at the number of people that are choosing to sit on the patio. When they were basically sawing the street in half, there were two nice ladies out there having tea in the afternoon.”

Sales at Drink Coffee are down slightly, but Anderson is optimistic that the end product will be well worth the current slowdown of business.

Sara and Britt Unkefer, owners of Bier Zot, reduced their lunch service hours while construction took place immediately in front of their restaurant on Hwy. 42 after seeing a reduction in daytime business. But they have found weekend business unchanged and are confident that Sister Bay will see great gains after putting up with some dust this year.

“A better waterfront, bigger sidewalks, being able to drive down the hill and not see any power lines… It’s going to be awesome,” said Britt Unkefer in an interview earlier this year.

Unfortunately, Kayser does not think she will see much gain from the construction at her location up the hill on Hwy. 57.

“All of the improvement downtown and at the beach and everything isn’t going to help my business at the top of the hill but I can understand why they’re doing it and I think what they are doing is lovely,” said Kayser.

The road in front of Domicile was closed through the two busiest months, July and August. Kayser’s sales struggled in August, but now she is seeing a slight bounce back given the new detour that takes all cars past her store.

“Now everybody has to come by and I have had a couple people say, ‘Oh, I finally found you’,” said Kayser. “Whether I make it up by the end of the season, which is just a month… I don’t know.”

With construction on the Hwy. 42 hill into Sister Bay, a detour routes cars along Country Walk Drive past the Country Walk Shops. John Seiberlich’s Top Shelf Gourmet is one of the first businesses northbound drivers pass on their detour.

“It’s been more traffic but a lot of gapers,” said Seiberlich, referring to visitors that look around but do not buy anything. “Business has been about the same; little or no impact. But just more foot traffic.”

Despite the rubble along the highway, most business owners praised the construction crew, Vinton Construction from Manitowoc, for their efficiency and cooperation with surrounding businesses.

“The Vinton people were fabulous. They were very accommodating,” said Kayser. “The fact that they’re opening up the main drag every weekend is pretty amazing.”

Anderson remembers the construction in Sister Bay a few years ago with disdain, but has found this project to be a far cry from that struggle.

“The last time they did a big road construction thing and the weather got bad so they had to abandon ship and left the town in disarray,” said Anderson. “This isn’t like that. I’m feeling pretty good about what they’ve been doing.”

For more information and up-to-date closures and detours, visit projects.511wi.gov.