It’s the right idea, but is it the right time and the right price? That was the question everyone was asking when the Sister Bay Board of Trustees met to vote on the $5 million purchase of Al Johnson’s Boutique and Marina property.

It’s a question many continue to grapple with after the board voted 5 – 1 in favor of the purchase; it’s the village’s second $5 million property purchase in three years. 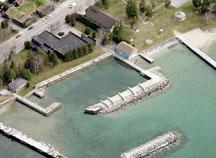 The 0.96 acre (40,000 sq. ft.) property includes 292 feet of shore frontage. It would link the village’s marina property to the north and the Waterfront Park property to the south, creating 1,936 feet of contiguous public waterfront. It also includes a 26-slip marina.

Village Administrator Bob Kufrin said the purchase would add no more than 70 cents per $1,000 of assessed value to Sister Bay property tax bills.

After the meeting, Al Johnson’s son Lars was relieved.

“It wasn’t as heated as I thought it might be,” said Johnson, who represented the family at the meeting with his brother Rolf. “My dad always wanted it to go to the village, even though he’s had many offers over the years.”

After the meeting, Lars hurried back to the restaurant to fill Al in on the result.

While almost every person who spoke at the meeting applauded the idea of opening up the waterfront, many scoffed at the price tag. The property’s assessed value is just $3.12 million, and it was appraised in September at $3.9 million.

Mary Jo Anderson, who owns a home on the water in Sister Bay, said the timing was wrong.

“I grew up here,” she said. “I love Sister Bay, but I do feel this just isn’t the time with the way everything is with the economy to consider a purchase of this size.”

Jim Champeau of Sister Bay supported the purchase, though the 82-year-old resident admitted it might force him to sell his home. Champeau said he served on the village board in the late 1960s and into the 1970s, and this purchase fulfills a long-term vision for the village.

“We need to finish the job,” he said. “Sure it’s gonna hurt some people, like myself probably, but the time has come.”

“You make your buildings and parks,” he said, “and they make you.”

Village Trustee John Clove cast the lone dissenting vote. He feared the impact of the tax increase required to pay for the property coupled with the burden from the $5 million purchase of the Helm’s Four Seasons property in 2007.

“I’m in favor of it, but not if it ads too much to the taxes of residents,” Clove said. “Since we bought Helm’s three years ago, several people with homes on the water have seen their taxes go up 39 percent, and with this it will rise to about 45 percent over four years. We’re taxing them out of the market.”

Mike Walker, the village assessor, questioned why the village was paying a premium price at a time when the real estate market is struggling to recover.

Ray Pelrine shared Walker’s concerns in a letter, saying the village was turning the real estate market upside down.

“My local unit of government should not be able to drive up tax assessed  values by making such huge property purchases, at prices way over market value,” he wrote. “No one can deny that this is being done. At a time when real estate values everywhere, including Northern Door County, have been shrinking, the village assessment of shore front property spiked significantly up.”

Clove said the village’s first offer was $4 million, but the Johnson’s best offer was $5 million. Village President Denise Bhirdo said the board felt it couldn’t let the property get to the open market and miss the opportunity to secure control of the waterfront.

Those who currently rent slips at the Al Johnson’s Marina urged the village to grandfather their agreements. The village originally planned to allow them to stay for three more years before the slips would be added to the village marina’s public pool for disbursement. Bhirdo changed course and charged the Marina Committee with the task of developing a solution within 60 days.

Trustee Ken Church, said it’s more imperative than ever that the village now look to sell as much of its property as possible, including a portion of the non-waterfront property that was acquired in the Helm’s purchase in 2007.

Church voted against the Helm’s purchase but felt he had to vote for the Al’s Boutique and Marina purchase to complete the waterfront plan. The deal will close in June, and the boutique property will be demolished in November, with landscaping completed in time for the summer of 2011.