The Sister Bay Bays nearly gave it away.

The Egg Harbor Indians were lifeless as the Door County League championship game moved to the bottom of the ninth inning on their home turf today. The Bays had pulled away to what seemed a safe 12 – 6 lead and starting pitcher Sam Forkert was going strong on the mound. But the Indians woke up. 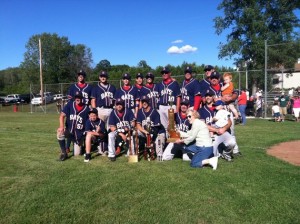 A sacrifice fly brought in one run, then a three-run home run by Tom Schmidt made it 12 – 10 and chased Forkert from the mound, his day done after 180 pitches. Egg Harbor quickly filled the bases again against Will Henriksen and a wave of disbelief swept over the Sister Bay crowd.

The bases were still loaded when Jason Fuller stepped to the plate with two outs and a chance to add the playoff championship to the Indians regular season crown.

Henriksen aided the Egg Harbor cause with a wild pitch that brought in another run. The Bays, it seemed, were doomed to choke in their first playoff appearance in 13 years.

On the bench sat Adam Biwer, the Bays longest-tenured player, sitting out with an eye injury suffered in mid-July. There was nothing he could do to stem the tide of Egg Harbor runs. Biwer, along with shortstop Alex Higginbotham and center fielder Tucker Emerson, had toiled through a decade of Bays futility that included four last-place finishes.

Now with a chance to redeem themselves, they were on the verge of an epic collapse, their hopes tied to the arm of a second-year southpaw. Hope was fading.

Then Henriksen reared back to throw the curve ball everyone knew was coming. The ball dropped heavy as it neared the plate. Fuller swung.

Catcher James Larsen leapt to his feet, Emerson sprinted in from center and Biwer from the bench. The Sister Bay crowd, out in full force for the all Northern Door finale, erupted in a combination of relief and pride.

This season the Bay Days were back, and the biggest of them all was saved for championship Sunday. Tonight, for the first time since 1994, the Sister Bay Bays sit atop the Door County League.