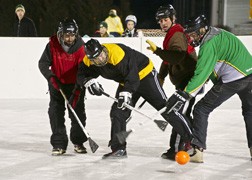 The Sports Complex is home to the Northern Door Broomball League.

Long-awaited improvements to the Sister Bay Sports Complex will come to fruition next year thanks to a large financial commitment to various projects made by the village last month.

When the village board agreed to borrow money to purchase the Helm’s Four Seasons property as part of a Waterfront Park expansion, they decided to borrow nearly $1 million in additional funds to complete various projects at the sports complex on Autumn Court.

“It’s a huge step forward,” she said. “It’s great for kids and something I’ve wanted to see for a long time, especially the ice rink. We have to remember we need things to do in the winter too.”

Village Administrator Bob Kufrin said $250,000 will go to the new baseball field, which will be home to the Sister Bay Bays County League team, which currently plays at a field behind Johnson’s Park. An additional $300,000 will go toward laying a permanent concrete pad for the Teresa K. Hilander Community Ice Rink, home to the Northern Door Broomball League and recreational hockey and ice skating. The ice rink board has long sought the pad to reduce volunteer hours needed for flooding, as well as improving the surface and lengthening the season. The pad is expected to be in place for the 2009 season.

The village allotted $100,000 for upgrades and additions to the concession stand facilities, and $150,000 was slated for park, site, and utilities improvements. The final $150,000 was set aside for site design and inspection.

Doersching said the village still supports efforts to build a skatepark at the complex, but didn’t provide funds at this time because there isn’t an organized group for the village to work with.

The Sister Bay Waterfront District Citizens Advisory Committee will meet Dec. 5 at the Sister Bay Fire Station at 6 pm. Documents, images, and the consensus plan can be viewed at http://intrranet.sisterbay.com.