Linda Sheard pays particular attention to detail in her work, which features glazes mixed by her husband, Bart. Photo by Katie Sikora.

You would think that someone who wakes every day to the shores of Lake Michigan might begin to take it for granted. Not so for Linda Sheard, master potter, who appreciates every detail of her home, gardens, and studio/gallery on the sandy shores of Lily Bay, a few miles east of Sturgeon Bay.

“There are the ever-changing winds, and the light, and at night the stars on the water. And the sun, how it shines,” she says wonderingly. “Although we face east, in the evening we get a residual sunset with beautiful pinks and oranges and purples.”

The colors of her environment deeply inform Sheard’s work which she describes as “of the earth.” Her pottery is rich with sandy browns, greens, and blues. “Our sky and water are blue, our grounds are sandy brown.” Sheard’s husband, Bart, is a pharmacist who also custom mixes Linda’s glazes on site.

The Lily Bay Pottery studio and gallery are located on the grounds of the Sheards’ home, in a building that is separated from the house by inviting gardens and pathways. Visitors pass through Linda’s studio and up a staircase into what she calls “our tree house gallery.” It does feel like a tree house, airy and high with views of both the gardens and the lake, golden wood floors and sage green walls perfectly setting off Sheard’s work.

Her pieces are both beautiful and functional, ranging from casserole dishes and cookie jars to a large urn that was custom-ordered to serve as a compost bin, to plates, mugs, and vases. Sheard has had all manner of custom orders, from dish sets to burial urns. “That’s very interesting, personal work,” she says. 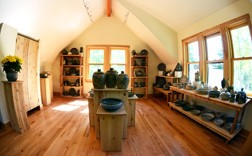 Lily Bay Pottery’s gallery is located above the studio in what Sheard calls a “tree house gallery.” “It does feel like a treehouse,” notes Schnorr, “airy and high.” Photo by Katie Sikora.

After 40 years as a potter, this is Sheard’s first gallery open to the public. The gallery had a soft opening last September, but she is now ready to welcome visitors and has invested in rack cards and marketing for her business.

Sheard’s creative journey began at the age of 16. “My mother caught me smoking, and it really shook her up,” Sheard says. “She wanted to replace that with something positive, so she enrolled me in private painting lessons.” Her teacher was a Southern lady named Miss Pipes who was a complete antidote to Sheard’s life with her mother and grandmother. “She taught French, music, and art. She had cats. She taught me about the world of creativity and thinking.” Sheard learned from her teacher by copying the masters and ended up graduating with a B.A. in Art from Western Illinois University.

After graduating, Sheard and her husband moved to Door County where she taught junior high art in Sturgeon Bay. They also opened a shop in Ephraim where they made and sold sand candles and supported themselves while Bart was in pharmacy school. Meanwhile, Linda enrolled at the University of Wisconsin – Green Bay and learned about clay. “There were five or six of us who went through the program, which was housed in a warehouse in the factory district in Green Bay. We were truly a community of potters.”

Another mentor of Sheard’s was the late artist, framer, and visionary Charlie Lyons. She says, “Charlie was very encouraging. He saw my early work and said to me ‘You’ve got to put some designs on it.’” Some of Sheard’s early motifs are still present in her work – waves, lines and zig-zags, and “splashware” that she still enjoys creating. 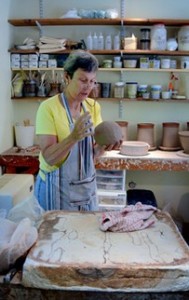 Linda Sheard of Lily Bay Pottery explains the throwing process, which begins by simply rolling clay into a round ball. Photo by Katie Sikora.

Her style continues to evolve, taking on fresh geometrical patterns and motifs. “My work has changed dramatically in the past 10 years,” she says, crediting the thought that she and her husband invested in building their house, and also her son’s enrollment in architectural school. “Some of my designs are very Frank Lloyd Wright – proportional and balanced. For every left there is a right.”

Sheard’s designs are deceptively simple but involve intricate, multi-step layers. She also works in porcelain, which she describes as “elegant and temperamental.”

Looking at Sheard’s flawless and understated work, it’s obvious she is a master potter, a term which she defines simply. “We’ve stuck with it.” Her passion for her work is that of a problem solver, as she describes the many false starts and do-overs that are required to create one finished piece. “The passion comes with working it out.”

While raising her children and moving frequently with her family, Sheard participated in juried art fairs and summer shows, where she received many awards of excellence and purchase awards. She has also belonged to groups such as the Wisconsin Alliance of Artists and Craftspeople and the Wisconsin Designer Crafts Council, among others. But, she says, “I don’t need a group. I’ve always been a loner.”

Last summer, she was awarded the juror’s choice award from the Hardy Gallery and judge John Whitney. “That was a surprise, and an honor I’m very proud of,” she says. Her winning piece, titled “Platter of Waves,” was worked and re-worked until it was right, and it was a culmination of all she had learned thus far in her career.

“People always ask how long it took me to make a particular piece. Now I finally have an answer: it took me 40 years to make.”

Lily Bay Pottery is located at 3450 N. Lake Michigan Drive. The gallery is open Wednesdays through Saturdays from 10 am – 5 pm, or by appointment. For more information call 920.743.6334 or visit http://www.lilybaypottery.com.