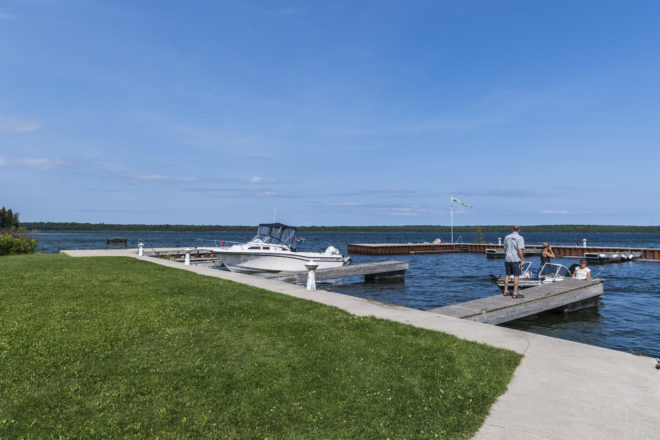 One of the proposed regulations is a total fishery closure from early March to June 15 on the Mink River downstream to the mouth at Rowleys Bay, pictured here. Photo by Len Villano.

After more than a decade of speculation, the spring fish and wildlife rules hearings will finally offer an online voting option next month.

Officially known as the annual DNR fish and wildlife public hearing and Wisconsin Conservation Congress (WCC) county meeting, the gatherings are held the second Monday of each April across the state.

Locally, this year’s hearings begin at 7 pm April 8 at the Sturgeon Bay and Kewaunee high schools.

When I attended my first spring meeting at the Kewaunee County Courthouse in the late 1970s, each question was read out loud, and voting took place by raising hands.

DNR and local Wisconsin Conservation Congress representatives took turns eyeballing the hands in a “one, two, three, four …” approach, and if you found yourself in the minority on an issue, you sometimes couldn’t take your hand down – or raise it – fast enough.

Many years later, a pencil and paper ballot were introduced. No peer pressure. Just stop in, fill out the ballot and leave early if that’s what you wanted.

Now, after an overwhelming vote by county representatives at last spring’s annual Wisconsin Conservation Congress meeting in Green Bay, any citizen can join in.

The State Conservation Commission (the predecessor of the seven-citizen Natural Resources Board) created the Wisconsin Conservation Congress in 1934. Thirty-eight years later, in 1972, legislation legally recognized it.

It was designed to be a liaison among the citizens of Wisconsin, the Natural Resources Board and the DNR, with the legislature getting involved at the tail end of a long public-input process.

For decades, that’s how it worked. Most major fish and wildlife rule changes in Wisconsin started with a DNR proposal, WCC advisory question or citizen resolution that allowed an avenue for public input and idea exchange about conservation issues. That’s changed since 2010, with some legislators bypassing the traditional channels and advancing rules on their own.

One can only speculate about what the future holds, but this much we do know: For the first time in the WCC’s 85-year history, online votes will count the same as those made in person.

How many will vote? No one knows. Statewide attendance often fluctuates between 4,000 and 7,000, a small fraction of the more than one million hunters and anglers in Wisconsin.

The record attendance was just under 30,000 19 years ago, the year a mourning dove hunting question was on the ballot. It ended up passing, becoming a law a few years after and – despite the uproar the proposal caused – has seen very little participation and no noticeable decline in dove numbers.

This year’s meetings
Although the DNR wants to ensure that anyone interested has a chance to provide input, there’s still a good reason to attend in person, especially if you want to vote for local WCC delegates or vote on or propose citizen resolutions.

If you’re not familiar with the process of proposing a resolution or how to write one, check out the WCC’s website for samples. If doing the online option, you’ll be asked additional questions that will allow the state to gather some demographic information.

The online voting will remain open for 72 hours and will go live at 7 pm April 8 through a link on the WCC’s website.

So what exactly is being voted on this year?

One of this year’s questions asks whether the muskellunge season should be extended from Nov. 30 to Dec. 31, and another asks whether the panfish daily bag limit on Clark Lake should be 10 (down from 25) – an effort to reduce harvest pressure and increase larger panfish.

There’s also a proposed regulation to a total fishery closure on the Mink River downstream to the mouth at Rowleys Bay beginning in early March and running through June 15. The goal is protection of the Mink River smallmouth-bass population during the spawning period when fish are very susceptible to multiple catch-release events.

Do you think deer tagging requirements should be restored? Should kids under the age of 10 not be allowed to hunt? Should small-game hunters be required to wear blaze orange (or pink)? Those are all advisory questions up for vote. Others ask whether you think the inland trout and Great Lakes salmon and trout stamp fees should be increased and whether public funding for public lands should be restored.

Keep in mind that vote totals are advisory only and don’t necessarily lead to a rule change.

See the complete questionnaire and learn more about the Wisconsin Conservation Congress at dnr.wi.gov/About/WCC/springhearing.html.