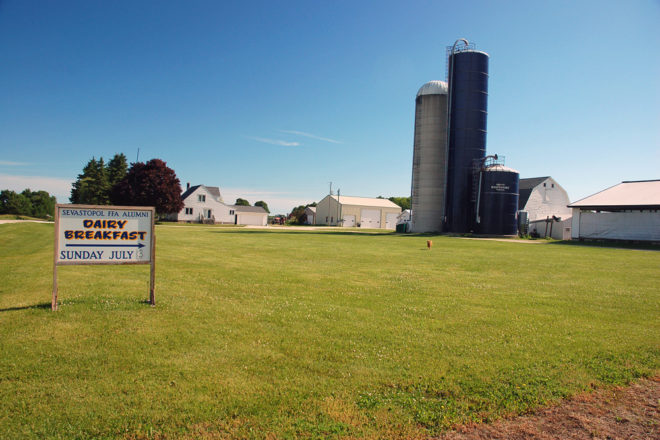 Jason Staats can barely drive a tractor in a straight line down a field of hay like his dad can, but his 10-year-old son takes the combine out to the fields at night when Staats is working the night shift as a nurse at the hospital.

His wife Nicole often drives down to Chilton or Madison at a moment’s notice to pick up a replacement part for some farm machinery and his mom is in the kitchen of their modest farm house north of Sturgeon Bay, preparing for the 35th annual Sevastopol Future Farmers of America (FFA) Dairy Breakfast on July 3.

“It’s definitely a family farm because there goes dad to rake,” said Staats, pointing to a man kicking up dust from the big wheels of a tractor as he heads out to the hay field. “Mom’s in the house. She’s been helping get ready so she’s in with the kids right now.”

The Dairy Breakfast brings about 4,000 people every year to a local family farm for live music, food and kids’ activities.

“They try to keep local as much as we can,” said Staats, explaining where the strawberries, maple syrup and even pancake mix came from before the event grew to feed thousands of people. “With the size, the bigger the breakfast has gotten, some stuff it’s just not feasible.”

“You get a lot of people that come from Chicago,” said Nicole. “It’s mainly tourists that don’t know what a farm looks like.”

It’s the exposure to where food comes from and the people who harvest it that stands at the heart of the event and the goals of FFA.

“You’re getting to see a whole lot less of the 30- to 60-cow dairies anymore because it’s not economically feasible. A lot of it is you have to get bigger or you have to get out,” said Staats. “There’s still some around but it’s definitely disappearing every year with people getting out of it.”

The concept of a family farm has changed since Staats was growing up on the same piece of land he lives on and farms today.

The small American family farm is disappearing. The number of farms in the country has decreased from six million to two million since 1935 and the average farm size has nearly doubled. Meanwhile, the total number of acres farmed has remained relatively stable.

Part of that is due to the markets and the return on crops. As farms began consolidating and producing more product at a lower cost, the prices of crops, such as corn, went down.

“Crop prices have been real low and you’re losing money on $3.30 corn,” said Staats about the agriculture commodity market today. “But you still have to put the crop in the ground even though you know you’re not going to make anything. Any businessman would think, ‘What are you doing?’ But you have your high years and your low years and hopefully the high years can make up for the low years.”

Smaller operations, such as the Staats family farm, do still exist and they can piece together a living between farming their own land and doing work for others around the county.

“I think we’re running somewhere between 650 and 700 acres. Last year we did close to 2,000 acres of custom work for other people,” said Staats.

Staats also supplements his farming as a full-time nurse in the emergency room at Ministry Door County Medical Center, where Nicole is a nurse as well.

“I really like having two different things,” said Staats. “When you have a bad day farming, you go to ER and it’s not just doing a different job, it’s a whole different mindset. Then there’s days you’re nursing and it’s like, ‘I just need to go sit on a tractor.’

“I had a full 45-hour day a couple of weeks ago when we were planting. Plant all day, nurse at night, plant all the next day until two in the morning.”

Second jobs are commonplace in farming today, but not because farmers have more time on their hands. Advancements in farming technology have only made the job more efficient, allowing for more acres to be farmed every year.

With GPS navigation in two of his tractors, Staats can simply push a button and ride to the end of the field, overlapping just one inch as the tractor goes back and forth among the rows.

“When I was growing up you didn’t have cellphones,” said Staats. “If you had calls to make, it was in the morning, at lunch or at night. Nowadays if something breaks, I’m able to have stuff fixed and have things going before I hit the end of the field.” 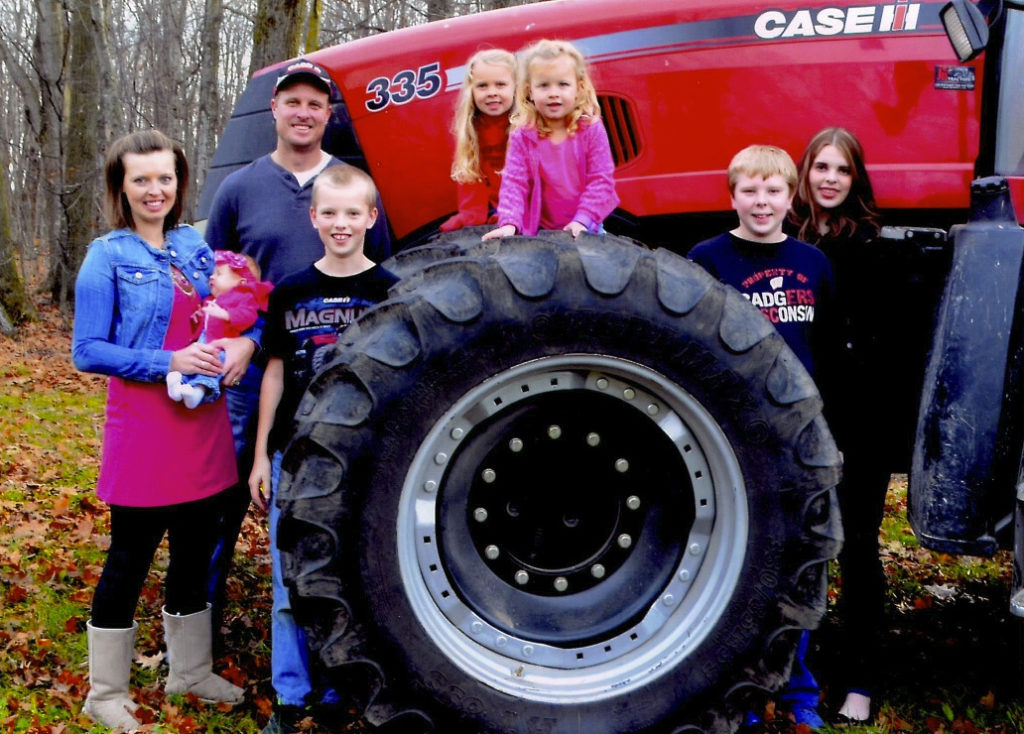 But the essence of what makes a family farm – reliance on neighbors and family – has not yet left the fields.

“Everything here is neighbors,” said Staats. “I got done cutting hay, cleaned it all up and I just had a feeling. Sure enough, I got a call. His broke down so you go and, on Father’s Day, you go finish cutting his hay. That’s the way it has to work out here. When something happens you cover for the other one.”

In the rural parts of the farming world, a neighbor is anyone within a stretch of dozens of miles. It includes the Staats’ family farm on Country View that has been in the family for 150 years and everyone else that might need a hand when something goes wrong.

Staats envisions his farm staying within the family as his six kids grow up.

“It’s called developing a work ethic,” Staats laughs as he describes how his kids are involved in the farm before they can walk. “My 10-year-old, he could run any piece of equipment I have…Braelyn, when she was eight weeks old, she would spend 10 hours in tractors. They grow up with it. If you teach them how to do it right when they’re young and you develop that work ethic, it will be there.”

The Sevastopol FFA Dairy Breakfast will be a way to teach those who may never have interacted with a rural farm.

“A lot of them don’t see where everything comes from and the equipment,” said Staats. “It is educational. We’re spread around throughout to answer questions.”

With 150 years of family farming, even the youngest of Staats’ children likely knows all there is to know about the lifestyle, where the tractor feels like home and they can see a good crop of corn just by looking out the window.

“It’s in your blood,” said Staats. “There’s no doubt about that.”