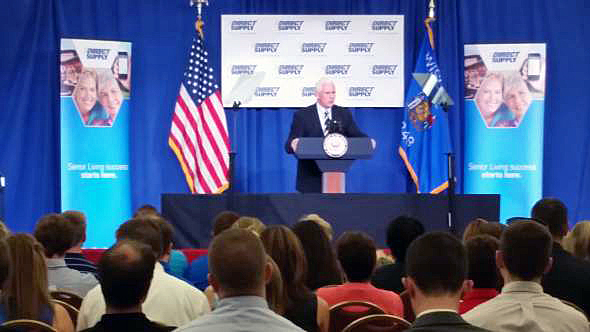 Vice President Mike Pence promised “help is on the way” for Wisconsin residents he says are struggling under the Affordable Care Act. Pence spoke in Milwaukee on June 10 to about 200 people inside the headquarters of Direct Supply, a firm that services the senior living industry.

Pence’s appearance was the Trump administration’s latest effort to build support in the U.S. Senate for a health care bill passed earlier this year by the U.S. House of Representatives. Pence blamed Democrats in Congress for the delay in final action. “I mean, they’re the ones who gave us Obamacare and now, they won’t lift a finger to help us rescue the American people from this mess they created,” Pence complained.

Martha Laning, chair of the Democratic Party of Wisconsin, described the current House bill as “devastating.” “It hurts the average Joe, and rewards the wealthy, who always seem to come out ahead,” she said. Laning said many thousands of Wisconsin residents would be kicked off of health care if the House bill makes it to President Donald Trump’s desk.

More Republican state lawmakers are lining up behind a push to end Wisconsin’s personal property tax, a move that could come with a big price tag for state government.

The personal property tax applies mostly to small businesses, which pay taxes on the value of their equipment. According to estimates from the state Department of Revenue, the tax brings in about $261 million per year to help fund schools and local governments.

Several GOP lawmakers are now pushing to repeal the tax as part of the state budget. Gov. Scott Walker said he’s open to the change, but only under certain conditions.

“I want to make sure that the property tax relief that we’re providing for homeowners across the state is maintained, I don’t want it to be one at the expense of the other,” Walker said. “So, if there are ways they can chip away at that without taking away from the property tax relief we proposed in the budget, then we’re willing to look at it.” 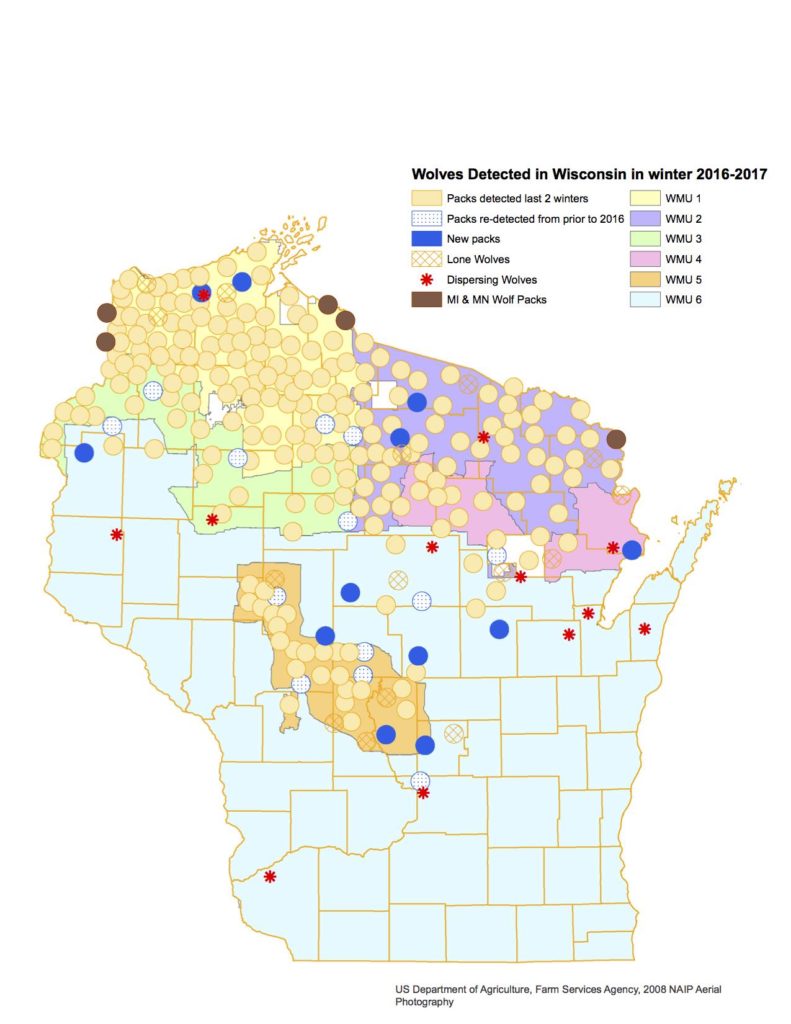 Wisconsin’s wolf population grew by 6.8 percent last year, according to new figures released by the DNR. The figures from the overwinter count show between 925 and 952 wolves, the most ever counted in the state, according to David MacFarland, large carnivore specialist with the DNR.

The wolf population has grown each year since a court ruling stopped the state’s hunting and trapping season in 2014.

“Population growth of 13 percent, 16 percent and now 6.8 percent respectively in the last three years,” MacFarland said. “That doesn’t represent stabilization. The population is still growing. Eventually we would anticipate that the population would stabilize, but we don’t know exactly what that point would be.”

The DNR counts wolves each year between Dec. 1 and April 14 with the help of trained volunteers, who look for tracks and other evidence.

A ruling is expected soon from an appeals court which could take wolves off the endangered list, and allow the state to resume hunting and trapping.

Two GOP state lawmakers are circulating a proposal they say would make the state budget-writing process more open to the public.

Right now, members of the Legislature’s finance committee can introduce and vote on proposals during meetings without any notice. Under the plan, co-sponsored by Rep. Scott Allen, R-Waukesha, proposals would have to be posted online for at least 48 hours before the budget committee could debate them.

“The intent is really not to tie the hands of the joint finance committee, it’s just to make sure that we have open, honest, above-board government,” Allen said.

Allen said the bill is partially in response to proposed changes to Wisconsin’s open records laws lawmakers attempted to add to the last state budget.

Those changes were ultimately removed from the budget after lawmakers received push back from across the state.

The proposal includes exemptions for emergency motions, which would be determined by a vote of three-fourths of the members of finance committee, and for motions that contain “minor substantive differences” from proposals that have already been circulated.