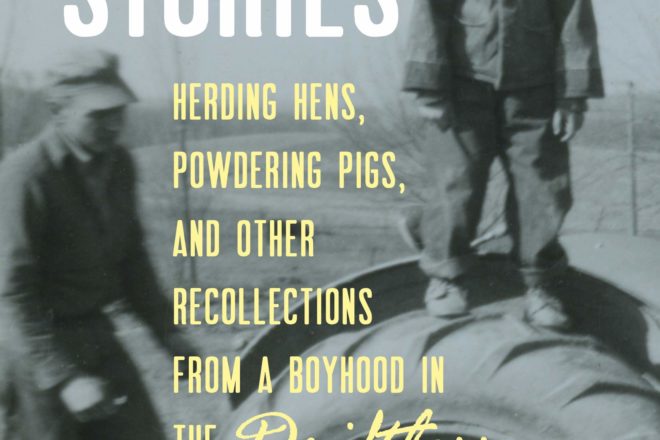 “Ridge Stories: Herding Hens, Powdering Pigs, and Other Recollections from a Boyhood in the Driftless” by Gary Jones, Wisconsin Historical Society Press, 2019, 208 pages

Gary Jones’ wife was not pleased. “Go take them off,” she said. But the essayist and poet who used to teach at Gibraltar High School – and who still spends more than half his year living in Door County – put his hands in the pockets of his oversized overalls and walked out of the store, his wife maintaining a “10-pace distance” in front of him.

After all, what man from Wisconsin’s Driftless Area wouldn’t want to wear a pair of overalls when, as a kid, he had once seen an angry brood sow charge his Gramps and sink “her fierce yellow teeth into poor Gramps’ crotch”? “Luckily, the crotch of Gramps’ overalls hung so low, no harm was done.”

This is just how things go in Jones’ new book, Ridge Stories: Herding Hens, Powdering Pigs, and Other Recollections from a Boyhood in the Driftless. In short essays that veer from hilarious to inspiring to being filled with the goodness of his mother’s homemade noodles with chicken during threshing time, the Driftless Area – with its windswept, almost survivable farms – comes alive.

Just the titles of some of the essays give an idea of how entertaining this book can be. “Do Ghosts Eat Cake?” “Victor, the Pig-Cutter,” and “The Rasberry Queen of the Ridge,” to mention just a few of the 48 essays, make the reader want to keep turning the pages to take them all in.

We meet Charlotte the sheep who, Jones thought, would get him out of mowing the front yard with a mower that he could never start. “Shepherding a dull but stubborn ewe, however, turned out to be as difficult as starting a secondhand mower.” It turns out that Charlotte loved canes of his mother’s raspberries much more than she liked grass.

Steve Bryant was a storyteller in the Ridge country who married Hattie, “a block of a woman nearly as wide as she was tall.” You couldn’t believe the stories Steve told folks. According to him, for instance, he was so quick that he once dodged a rattlesnake’s fangs that sank into a wagon’s yoke instead. The yoke swelled up so much from rattlesnake venom that when he got back to the barn, he couldn’t unhitch the wagon from the tractor.

Mixed in with the stories and characters are a time and a place that no longer exist. Portraits of the Pleasant Ridge School, where Jones attended grade school, include the “1950s drills conducted for schoolchildren in preparation for a possible atomic attack.” The work of milking dairy cows during an era before automatic milking machines conjures up feelings that are part nostalgia, part wonder at how Wisconsin once was and part relief that times have changed.

Jones often participates in the Dickinson Poetry Series readings at the Unitarian Universalist Fellowship in north Ephraim with other Door County poets during the year’s milder months. He’s a wonderful, widely published poet, which you can discern from the prose in Ridge Stories. His prose, which has also graced the pages of the Peninsula Pulse and Door County Living, sings with all the windswept music of fields of alfalfa and oats. This is simply a magical book.

Thomas Davis as an educator, environmentalist and writer who recently published the historical novel In the Unsettled Homeland of Dreams. He has been the president or chief academic officer of five tribal colleges and universities in the U.S. As a member of the tribal-college movement, he helped to found the World Indigenous Higher Education Consortium.