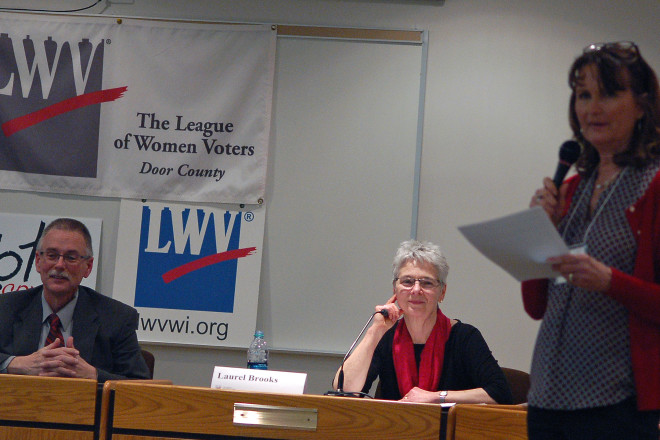 Citizen interest in the affairs of Sturgeon Bay has grown in the past 16 months since the revelation that a hotel is planned for the city’s Westside Waterfront Redevelopment project. That interest was reflected yet again on March 14 with the common council chambers on the second floor of Sturgeon Bay City Hall filled to its 99-person capacity, and the overflow of citizens directed to a first-floor room where they could watch on a screen the two candidates for mayor answer submitted questions.

Incumbent Thad Birmingham and challenger Laurel Brooks answered 17 questions from attendees during the League of Women Voters of Door County candidate forum. At least one of the questions appeared to have been submitted by a Brooks supporter with her knowledge, for she seemed to read from a prepared statement to answer the question about term limits for members of the Waterfront Redevelopment Authority (WRA).

First came opening statements. Brooks, who serves on the city’s Plan Commission, went first with a message of inclusivity and openness.

“I want to throw open doors of city hall. This is the city’s home, and everyone has a place,” she said. “Our resources do not reside in the DNA of a few aging men who have come to view Sturgeon Bay as their own private domain. Some members of this exclusive club have justified their grip on the city by saying they have been working on this plan for 30 years. It’s now 30 years later and the plan is looking irrelevant and desperate. This is the very reason we need fresh eyes and new perspectives.”

Before beginning his opening statement, Birmingham offered 30 seconds of his time to his challenger, who did not finish her statement in the allotted two minutes.

The Mayor explained that before his six years in office, he spent almost two years on the common council. He said he entered office with three main goals in mind – the health, safety and welfare of the citizens of Sturgeon Bay.

“When I thought about getting involved in city government, it seemed like there was a real void of direction at the time,” he said. “It just seemed like we weren’t going anywhere as a community. There was a lot of negativity, I felt, and I thought I could bring something to city government that would help change that. It was important, I felt, that we move into the next century and that we really go out of our way to help the residents by providing the kind of opportunities they deserve and weren’t getting.”

The first question asked the candidates to describe their five-year growth plan for the city.

“The five-year growth plan we’ve had in the past is basically the same moving forward,” Birmingham said. “We want to make sure that we grow our economy. It’s very important in a zero levy limit environment that we increase our assessed value with growth. There’s really only two ways we can keep up with our increased expenses, which we don’t have control of all of them. By increasing our assessed value, we can raise our tax rate. Last year our tax rate went up three-quarters of a percent based on net new construction over the prior year. The other way we can do it is through borrowing, which, by the way, I think is a terrible way to run the city, but, unfortunately, the state hasn’t given us a lot of options by imposing the zero levy limit.”

Brooks said an increased tax base is wonderful, adding that there are “limited opportunities for responsible expansion” within the boundaries of the city.

“We need to be developing a new track for business, which includes technology,” she said. “Just as we did a business incubator, we need to consider a technology incubator.”

The second question asked what the candidates would do to ensure that citizens feel they are being heard by their elected officials.

“Citizens need to be listened to and communication is a two-way street,” Brooks said. “Silent listening from the local government is not communication. Communication is welcoming citizens into the process, hearing their ideas, engaging in a dialogue and providing opportunities for that to be an ongoing way of doing business.”

She suggested the council and mayor have regular office hours to meet with citizens on a regular basis. She also said she would like to see council members “engage in a little colloquy before they vote” in order to give citizens an idea of why they voted on an issue, in order to get pre-vote and post-vote feedback from their constituents.

Birmingham said when he first was elected to the council, much of the city’s business was handled by the council, and citizens were given a chance to sound off at the beginning and ending of the meetings. He felt those were long, inefficient meetings, and felt a better way to engage the public was to put the bulk of the work on the shoulders of the various committees. He suggested the place for citizens to engage council members and city staff is at the committee level, not at common council meetings, which, he said, are “basically a business meeting for the council.”

When asked if they support the Westside Waterfront Redevelopment project, Brooks said she is unhappy with the process, particularly that the Plan Commission voted to hold additional meetings on the project that were never held.

“Instead, the plan was approved and railroaded through,” she said.

Birmingham said the project was on the drawing board long before he came into office. All agreed that a developer was needed to help pay for the project, and that the idea from the start was to engage the public in the decision-making process.

“It did change, there’s no doubt about that,” Birmingham said. “We believe we were successful with the engagement.”

Regarding that previously mentioned WRA question, the question pointed out that many of the WRA members have served for more than 20 years. Should there be term limits?

Birmingham described the WRA as a very important and apolitical body. He said he wasn’t certain if term limits would be a good idea for any committee.

“With age, believe it or not, does come some wisdom,” he said. “There’s also a lot of history that comes with longevity. That’s the kind of stability I think that is very important when you’re dealing with an area that is so crucial to the city.”

“It is true that the members of the WRA are not elected. To that extent it is not political. But in every other way it’s every bit as political as every other action that occurs in the city and in life in general,” Brooks said, adding that the WRA is not required by statute and that the Plan Commission could do all the work of the WRA, which, she said is given the authority to dispose of taxpayer dollars.

“Some members, elected and unelected, own property in the defined districts that benefit from these dispositions. Either the WRA should be disbanded or its membership reconfigured to eliminate perceived or actual conflicts of interest,” she said.

You can watch the entire forum on Sturgeon Bay Public Access.