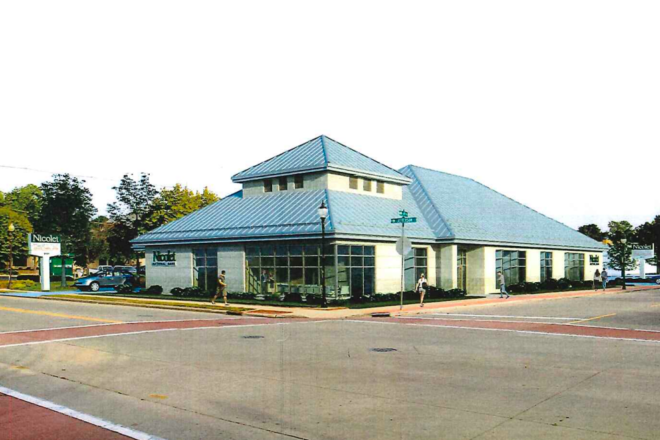 The Nicolet National Bank property on the north side of 4th Avenue between Jefferson and Kentucky streets will get a new look this year as the existing building is demolished and reconstructed. The current structure is slated for demolition in June and July and construction will begin in August, with an anticipated open date of April 2019.

The reconstruction was approved by the city’s Aesthetic Design and Site Plan Review Board on April 9. City Administrator Josh VanLieshout said the building’s new drive-thru will still need approval from the Plan Commission.

Although the building is significantly smaller than the one staff are currently working in across the street, just one story instead of three, the bank will retain all staff throughout the move.

Jamie Alberts, senior vice president of Commercial Banking for Nicolet, said there are no plans yet for the building they are leaving behind.

The design was created by Performa, a De Pere-based firm that has designed all of Nicolet’s buildings since its inception in 2000.

“We’ve helped craft the brand, look and feel of all the newer facilities,” said Brian Netzel, director of design for Performa. “We’ve been the architect to fuse the brand on existing facilities.”

The review board generally liked the design, but did raise some concern about cars leaving the drive-thru and trying to exit onto Jefferson Street.

“If you’re trying to pull out there that’s going to be a challenge,” said board member Cindy Weber.

“The biggest challenge is if you’re trying to take a left,” said Alberts. “I can’t disagree with that.”

While out of the purview of the review board, they suggested the common council consider eliminating the on-street parking adjacent to the bank on Jefferson to improve visibility for those leaving.