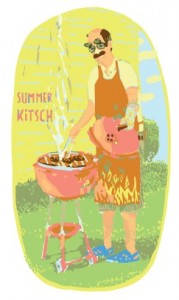 A vintage black and white photograph hangs in our dining room, the image of the house where my father was born, 1908, Town of Plover. The site is barren compared to its current condition, then a treeless plain except for a background of stumps. Despite the farm had already been active for fifty years, the stumps of the Pinery were still evident. The thing about burning out stumps is that once charred they become immortal. Moss, lichen, fungi won’t earnestly grow on a fired stump, even ants find them inhospitable. Once charred these stumps continued to reside like craterless meteorites, haunting the landscape, taunting the field. Eventually their roots did yield their grip and they were towed or rolled to the hedgerow, there to hiss and catcall another generation.

It was a log house like others in the neighborhood, at the time a prosperous dwelling, a two-story hand-hewn, notched in a pattern known as half dovetail, when well done a deliberate show of craft. Plover Town in the period after the Civil War was a better than average farming community. In field vernacular known as a well-drained soil, more sand than clay. A quickly warming soil available to cultivate and plant in May even April: wheat, oats, rye, clover, of course potatoes. Twenty thousand acres of that tuberosum by the turn of the century, when every farm-raised potato was for sustenance and cash money. Three acres, five acres, maybe even ten or twenty, rarely more, horse-drawn diggers, hand-picked potatoes. In combination with a milk cow and a patch of potatoes mankind had gained the most sustainable dietary regime in history and the most readily available. New potatoes by early July, some weeks before wheat and rye, an acre of potatoes produced five times the dry weight of wheat or rye. If the Roman Empire and Egypt had lived by wheat, Ireland, Scotland, Norway, Holland, Germany, Poland, Russia lived by potatoes.

Hot summers in the log house were without decoration…insufferable. Our grandmother proudly owned one of those cast iron marvels that performed all manner of cooking: boil water, fry bacon, make toast, bake bread, thaw mittens, tend a calf. If any time from July until September that same marvelous Monarch could turn the house to a Hades, or a Venus if you prefer.

Long hot summers were the cause for that familiar substructure added to houses known as the summer kitchen. An inelegant lean-to contrived of raw pine boards and 2 x 4s, only to add a tarpaper roof and the result was the most advanced kitchen aid available in 1908. Sometime in April or May the kitchen range was relocated with the help of neighbors from the kitchen proper to its summer pose in that lean-to. Moving the stove was a round-robin chore so routine it ought have gained reference on the church calendar the same as Epiphany and Christmas. With the chore completed the house was rendered habitable for the next three months, sometime in early October the same round of housekeeping took place and the menfolk made the circuit, house to house reinstalling the cast iron monstrosity to the house proper.

What brought the subject of the summer kitchen to mind was my wife’s comment that she hadn’t cooked a meal indoors during the week of a recent heat wave. Our eating pattern had changed over to the summer kitchen, in our case the grill in the front yard. Grilled zucchini, grilled potatoes, sweet corn, new potatoes parboiled then smacked with a hammer and teased with a hot wok. Such is our dependence on olive oil I’ve wondered if a breeding program might work for a Wisconsin-tolerant variety, to think I’d like an olive grove.

It seems the summer kitchen still attends our summer habits. To witness that outsize evolution of what started out modestly in the American backyard as a charcoal grill not much bigger than a hub cap that stood on the same shaky legs as a newborn calf. As summer temperatures soar across the continent, Americans resort to the summer kitchen. An alternative made easier because “the stove” isn’t cast iron and comes with wheels.

My grandmother Fletcher went one better for her summer kitchen, she had her Eugene site a spare Monarch or maybe it was a Sears Comfort Heat under the shade of a generous elm tree. There she canned apples, canned beef tongue, canned spring fryers, canned beets, tomatoes, summer squash. A hundred dozen, cherries, grapes, rhubarb, elderberries, the list itself insufferable to yet remember; cauliflower, and that mystical healing soup or chicken legs. The cellar of my grandmother’s house was ten feet deep, part for the keep of potatoes, the rest of that dark hole devoted to canning shelves floor to ceiling equipped with a ladder. Not bad for an elm tree summer kitchen.