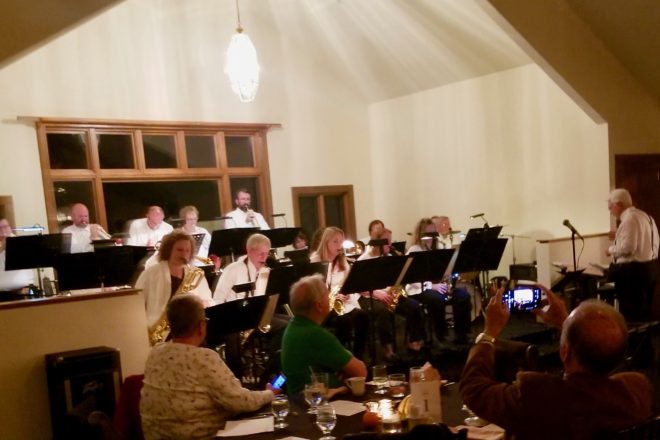 When Jamie and Jason Palmer pulled into the full Maxwelton Braes parking lot on Oct. 24, they were certain there was another event scheduled on top of the debut concert of the Swingin’ Door Big Band. As they headed to the second-story ballroom, they could hear the buzz of the crowd, and to their amazement, the crowd was there for swing music.

“We heard all this noise when we walked up to the ballroom,” Jamie said.

“Every table was full,” Jason added, seemingly still filled with awe by the turnout.

“They happen to have this 1930s ballroom that was designed for big bands,” Jamie said of the Maxwelton Braes venue. “You walk into the building, and all the black-and-white pictures are from the ’30s. The acoustics are phenomenal. There’s a nice dance floor. It was just a perfect fit.”

It was Jamie who had the idea to create a big-band swing group as a fun, year-round activity.

“Winters are boring,” she said. “All the fun stuff seems to happen when all the tourists are up here. We wanted to have something that’s here year-round. I love the music from the 1930s and ’40s.”

Luckily, she knew someone who has the connections and skills to make a swing band happen: her husband, Jason, who’s the music director of the Peninsula Symphonic Band.

Before retiring to Door County, the Palmers founded the Fox Valley Academy of Music Performance in Aurora, Illinois, which is home to the Fox Valley Philharmonic Orchestra, the Fox Valley Youth Symphony, the Academy Orchestra, Youth Strings and the Access to Music program. Jason served as music director of the orchestras, and Jamie was the organization’s executive director.

“Over a period of a year, I kept bugging him, ‘Wouldn’t it be nice if we had a jazz band?’” Jamie said. “I wouldn’t get much of a response because he’s involved in so many adventures.”

But finally, Jason decided to run the idea up the proverbial flagpole, first mentioning the idea to the volunteer players in the Peninsula Symphonic Band.

“There’s really only three out of the 16 [who] aren’t symphonic band members,” Jason said.

Although 16 players are normally the number you’re going to see on stage, Jason is proud that the idea of performing in a volunteer swing band was so appealing that “we had 25 players come out of the woodwork. So if somebody can’t do a particular gig, you’ve got a sub. We’ve got some versatility in the sax section. You can even – within a set – rotate somebody in and somebody out, like a volleyball team.”

The band also has four singers who lend their distinctive personalities to a song: Jamie Palmer, Donna Ruzika, Claire Mortkin (a favorite at Third Avenue Playhouse and the star of the 2014 TAP production of Souvenir, based on God-awful singer Florence Foster Jenkins), and Whitney Gross, wife of bass player Brandon Gross.

As for the music, Jason said you can expect to hear all the biggest names of the big-band era: Goodman, Basie, Ellington, Dorsey, Miller.

“We’re trying to bring back that original ’30s, ’40s look, right down to the tablecloths and the candles, so it’s not just going from one piece of music to another,” Jamie said. “The band pauses between songs to let people have conversations. We peppered in some vintage 1930s [and] ’40s radio commercials.”

And if people want to dress the part, more power to them, the Palmers said.

“It’s a fun evening, no matter what your age is,” Jamie said. The all-inclusive, three-course meal that precedes the dance concert is $25, with four entrées to choose from. There’s also a $10 cover charge for the band (both for dinner guests and those who just want to hear the music), with proceeds going to band purchases such as the lovely baritone sax that’s now part of the ensemble, and scholarships for student musicians to attend music camps such as Birch Creek.

To learn about the Nov. 14 performance of the Swingin’ Door Big Band, consult the Peninsula Symphonic Band’s website at peninsulasymphonicband.org. Make dinner reservations with Thyme Cuisine at Maxwelton Braes by calling 920.839.2500.

Catch the Peninsula Symphonic Band during its annual Veterans Day concert Nov. 11, 7 pm, at Prince of Peace Lutheran Church, 1756 Michigan St., Sturgeon Bay. The Swingin’ Door Big Band will also do a pre-Valentine’s Day performance at the Lodge at Leathem Smith in Sturgeon Bay on Feb. 13.