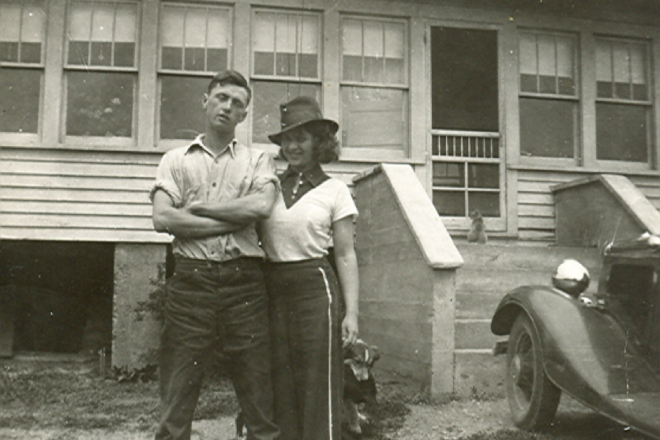 Author Bob Potier’s parents stand in front of the family farm around 1938. The family dog, No-Name, stands devotedly behind them. Submitted.

Ours was a small farm in the 1930s, not like the giant corporate farms of today. My grandparents — of Belgian descent — had scraped together what they could to purchase a farm on Highway C, south of Sturgeon Bay.

Their son — my father — married my mother at a young age. Because I was coming at breakneck speed, practicality demanded that we all live with my grandparents. I spent my first five years on their farm.

I dreamt, thought and pondered the way a four- or five-year-old does: about the days ahead, wondering when plowing would start or why Dad was in such a bad mood that day. Sitting on a rickety, gray chair — one of three, well worn with the paint flaking off — I heard a small squeak and feared a chair leg might soon give way.

Being in our large, enclosed and rather empty porch, I was able to see perfectly through the crystal-clear windows that my mother had washed just that morning with vinegar and water. It was a real task because the porch extended the width of the house, and the windows ran the full length.

I wondered whether my mother had thought of this on her own or whether my somewhat stern grandmother had requested it. I felt a warm pride and decided my mother had made the decision on her own. With half a dozen siblings in her parent’s tiny, poverty-filled home, I knew she’d been a hard worker and must be appreciative of her current circumstances.

Sitting there on the porch, I had an impressive view of the farm buildings and barnyard. The tall, concrete silo dominated, while the red barn struck an equally imposing view. I watched No-Name, our beautiful mutt, pawing at the dirt and anticipating his supper.

I was quietly waiting for my own supper to be called. It was obvious the day would end soon. The incredible, cerulean-blue sky was dissolving into slightly more ashen blue, and clouds and gold were starting to skulk near the horizon.

Suddenly, a large, golden ray of sunlight darted from between two clouds and landed across a portion of our farmyard, finally giving an outflow of shimmering, golden light — bizarrely across the side of our outhouse.

Before I could consider the significance of this phenomenon and a beautiful side of nature that I’d never seen before, I heard the call for supper from my grandfather, who had suddenly joined me. He viewed the barnyard and said quietly and seriously, “It’s a goddamned beautiful way of life.”

Now as small farms go, my grandparents’ farm was typical. There was a barn, storage sheds, a two-story wooden house and a chicken coop. Certainly of equal importance was the tiny outhouse, sitting strategically away from the main house. Ask any farmer with a sense of humor — or, more particularly, his wife — what the most important building was, and they would always emphasize the outhouse.

I once asked my grandfather why the door of the outhouse had a cutout of a moon. He enthusiastically jumped at the chance to enlighten me.

Historically, he said, throughout Belgium and most of the world, farms had two outhouses: one for men and one for women. In colonial times, when the majority of people couldn’t read, the outhouse for women had a moon cutout and the one for men usually had a star. Over time, people realized that two outhouses were just too much work and took up more room than necessary.

And at some point, wise souls realized that the outhouse for men wasn’t kept up as well as the outhouse for women — as women would testify — and it was best to use the women’s symbol of the moon for all outhouses. Creative types might use a different design such as a heart. But any type of cutout on the door would do two things: shed a little light in the dark hut and provide some ventilation.

Every farmer, including my grandfather, had to become an expert on outhouses because he had to build one. They were built over a five-foot hole in the ground, certainly requiring a strong back. Usually, a hole would last about five years, depending on the size of the family, before being filled. Then the outhouse would be moved or rebuilt elsewhere.

At one point during my grandpa’s explosion of wisdom, he suddenly developed a broad grin and said that the poop deck on a ship was probably not what I thought it was. Sometimes his jokes just came out of nowhere. But then, realizing I had never heard of a poop deck and had little knowledge of ships, he went back to outhouses.

From the main house, a well-traveled, weedy dirt path wound its way to the small outhouse — very nondescript and looking lonely. But certainly it wasn’t. The path had barely discernible footprints leading to and from the outhouse. Brave dandelions and miscellaneous weeds pushed up from around the edges of the low building.

I graduated to the outhouse after first using a potty, which I remember well. (Even more, I remember my mother sticking suppositories up my rear.) When you graduate to the outhouse, it’s like you become a man: You’re on your own and left to your own devices. You can ponder why there are two holes and which one you should choose. How far is the drop? What if I fall in?

We didn’t have toilet paper in those days, and I’m guessing that was the norm. But, I didn’t take a tour of outhouses to give them inspections or ratings. In any case, we always looked with great anticipation to the delivery of the very large Sears catalog. It was two or three inches thick, printed on grainy paper. This was our toilet paper as well as our reading material. At my young age, it was just viewing material.

Most people today aren’t aware that Sears used to be today’s Amazon. Sears sold everything imaginable, including an actual home or two. Presumably, they were prefab. Even as a kid, I knew you couldn’t get a house in a box.

Sears also sold two models of nicely designed cars that particularly intrigued me: the Kaiser and the Frazer. I loved them and constantly went back to that page. I was stunned when that page was suddenly missing. From those cars possibly grew my burgeoning interest in car styling, and I later won styling competitions for high school students sponsored by the General Motors Craftsmen’s Guild. And it all began in an outhouse!

So the outhouse was of great significance on any farm — much more than a device to draw flies. Certainly, it was one of the first structures to be built on the property. As a young child, I was well aware of the many faults of an outhouse, and going in the middle of the night was an undertaking best left to the brave. Today the lonely outhouse lives on as a rural curiosity.

Bob Potier grew up on the farm at 6951 Hwy C in southern Door County that is now home to Fiddler’s Farm, a music and event space. The outhouse is no longer in use. He now lives in Long Beach, California.