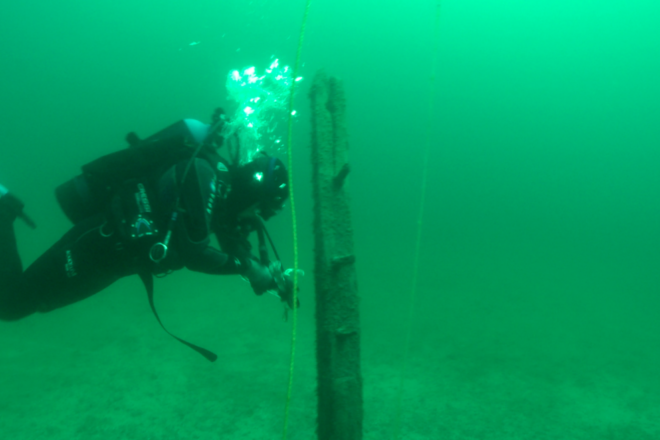 A French archaeologist examines the piece of wood before excavation in 2013. “I find it extremely interesting that La Salle’s men, after the disappearance of Le Griffon, discovered a flag staff among some other items such as a hatch cover, cordage and tarred britches. The flag staff was attached to the knee,” Libert said. “What we have is a bowsprit with a missing knee and flag staff. Noted in the French report, the size of the recovered bowsprit is consistent with a ship the size of Le Griffon – 48 to 52 feet.” Submitted.

In his day, 17th century French explorer René-Robert Cavelier, Sieur [Lord] de La Salle, was considered haughty, temperamental and reckless. Some thought him arrogant and self-serving. And at least one person called him a mad, crack-brained adventurer.

“I’m not some kook, like the State of Michigan might tell you,” Libert said in a recent telephone call to the Pulse from his home in Charlevoix, Mich. 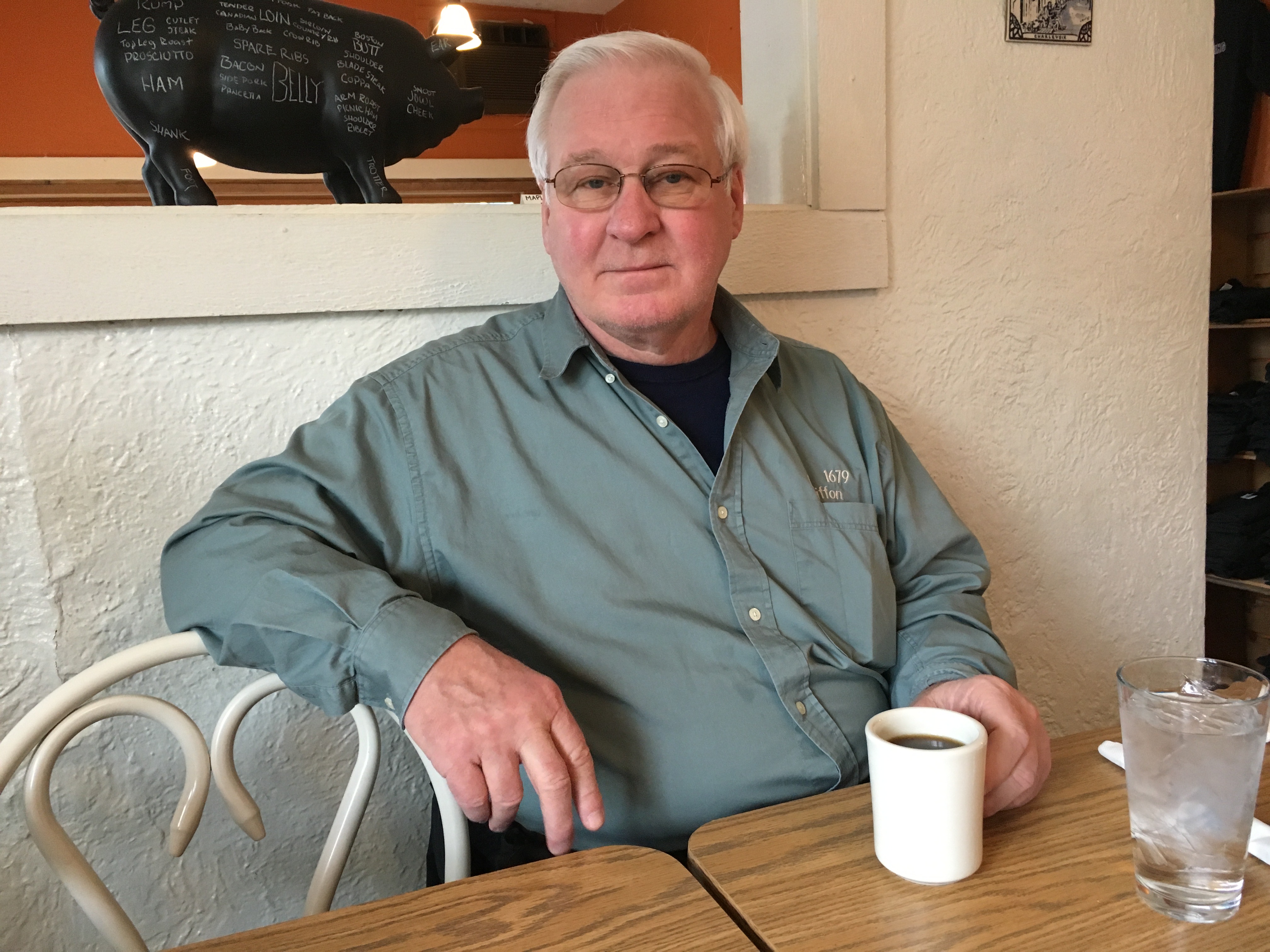 Steve Libert at his favorite Charlevoix, Mich., restaurant, Smoke on the Water. Submitted.

Libert and his wife, Kathie, moved from Washington, D.C., to Charlevoix five years ago, after he retired as a government intelligence analyst for one of the alphabet soup agencies. They moved where they did so Libert could be closer to the “white whale” he has chased most of his adult life.

“We were in our 20s when we started this and I’ll be 64 in March,” Libert said about his hunt for Le Griffon, the La Salle barque that was last seen – by Father Louis Hennepin – leaving Washington Island in 1679.

“I haven’t given up,” Libert said.

Like La Salle in his determined effort to find a northwest passage to the Orient and then to establish a French colony at the mouth of the Mississippi, Libert is single-minded in his pursuit of the greatest mystery on the Great Lakes – what happened to Le Griffon?

With a 20-foot wooden object in his possession that he is inclined to believe is the bowsprit of the missing ship, and evidence of possibly related detritus nearby on the lake bottom, Libert will go this far:  “We don’t have a hundred percent proof that it’s the Griffon, but things are looking pretty good.”

Without the context of the times and from this 21st century vantage point, it’s hard to judge La Salle. From here, he seems a very obstinate and unlucky man.

Despite not establishing the colony as intended, La Salle still laid claim in France’s name to the great tract of middle America that eventually went to the U.S. in the Louisiana Purchase.

However, La Salle had a history of losing vessels and making questionable decisions that did not sit well with his fellow adventurers, who finally murdered him after an epic failure at establishing a colony at the mouth of the Mississippi River.

That final mission ended in disaster not only for La Salle, but also for many of the 300-some adventurers, colonists and soldiers who set off from France on July 24, 1684. They never found the mouth of the Mississippi due to La Salle’s woeful miscalculations.

Three years into the expedition, on March 19, 1687, the 43-year-old expedition leader was killed by a crew member. What might have been an illustrious life in the service of Roi Soleil – the Sun King, Louis the XIV – ended with a shot to the head from a fed-up member of the crew he marooned in what we know as Texas, nowhere near the mouth of the Mississippi. 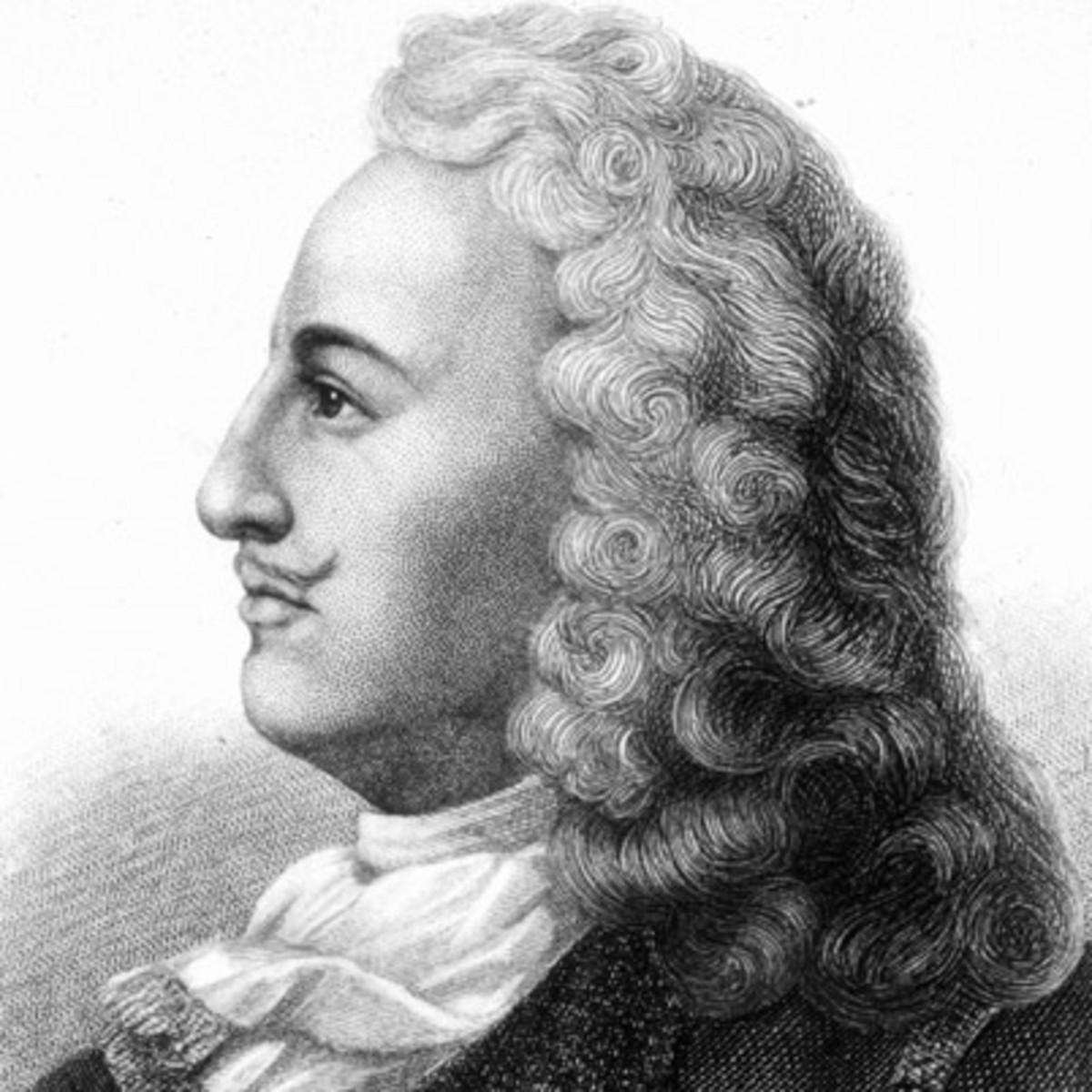 Of the four vessels that set sail on the ill-fated expedition, one was captured by Spanish privateers while still on the Atlantic, the storeship was lost at the mouth of Matagorda Bay, the naval escort Joly returned to France, and the final ship, the flagship barque La Belle, was wrecked in late 1686 during a squall off the Matagorda Peninsula.

Fast forward 300 years, to 1995, when Texas archaeologists discover the remains of La Belle, thereby beginning a massive recovery project that reclaimed what remained of the hull and more than a million artifacts. The French government holds official title to the recovered hull and artifacts, but the Texas Historical Commission was granted control for 99 years, and many of the items are on display in Texas museums. The hull is on display at Bullock Texas State History Museum in Austin.

Libert hopes one day to have a similar arrangement with a Great Lakes museum to display the remains of Le Griffon, a barque similar to the La Belle that was part of La Salle’s earlier mission exploring the Great Lakes in the hopes, of course, of finding that easy passage to the Orient.

La Salle’s lost Griffon has occupied Libert’s mind since childhood, when he first heard about it in 8th grade.

“I’ve been interested in it ever since I heard the history teacher talking about it,” Libert said. “The thought of finding this vessel was always on my mind. I don’t want to fail on this project.”

As reported in the Pulse back in 2014 (doorcountypulse.com/holy-grail-great-lakes-le-griffon), Libert and his team operating under the name Great Lakes Exploration Group, Inc., believe they found the bowsprit to the ship that went missing almost 340 years ago.

The excavation of that 20-foot chunk of wood came after an 11-year legal battle that Libert eventually won in federal court. Various tests have concluded that the piece of wood could date back to the 1670s, but none of the tests has been conclusive, and some people, including Michigan’s underwater archaeologist, have declared the piece of wood is nothing but a common pond net stake used by fishermen on the Great Lakes.

“I can tell you what we have is definitely not a pond net stake,” Libert said.

For confirmation that this is not a pond net stake, he suggested a call to commercial fisherman Charlie Henriksen, who has spent a lot of time on the search with Libert.

A composite image from three photographs looking down at the excavated hull remains of La Belle, excavated by the Texas Historical Commission in 1995. The photos were taken in 1997 from the roof of the cofferdam that surrounded the ship and kept it in a semi-dry environment. La Belle was the ship of French explorer La Salle, lost at Matagorda Bay in 1686. The photographer was an archaeologist working on the project.

Libert said through satellite imagery, he has clues to where the hull and the ship’s cultural artifacts may be, but he quickly adds, “It’s like looking for a contact lens.”

“Some other parts of the ship we have found,” he said. “I’ve applied for permits with the State of Michigan to get permission to actually extract them from the bottom. We’re getting ready to go back again. I’m going to keep going. We just have too much information.”

The mysterious piece of wood remains in Libert’s possession, but eventually he would like to find a Great Lakes museum to display it. He mentions that since the wood has been soaking in a preserving solution, markings that were previously not discernable have emerged, including what appears to be a stamped “D” that is similar to letters and Roman numerals found on what remained on the hull of the recovered La Belle.

It is believed the markings were to help in the construction of ships in busy shipyards during those mostly pre-literate times. Those assembling the ship might not have been able to read, but they could distinguish letters that might tell them which side of ship a particular fixture was supposed to go.

All of which makes Libert believe he is on the right track.