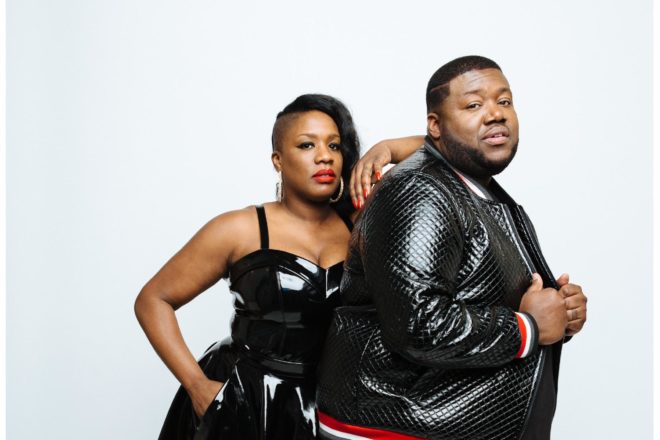 (From left) Tanya Blount-Trotter and Michael Trotter Jr. of The War and Treaty.

When Michael Trotter Jr. and Tanya Blount-Trotter met at a festival in 2010, they didn’t know they’d be performing for audiences all over the country only a few years later. The Michigan-based duo started small, performing together in 2014 simply as Trotter & Blount, and releasing their debut EP, Down to the River, three years later.

Since that debut in 2017, The War and Treaty has performed at the Academy of Country Music Awards and the Grammys, toured internationally and earned Artist of the Year at the 2020 International Folk Music Awards. The artists have also released two full-length albums: Healing Tides in 2018 and Hearts Town in 2020, with a finished album on the way.

Named one of the 20 Best Acts of AmericanaFest by Rolling Stone, the band’s high-energy performances helped it to grow in popularity. Trotter plays piano; he and Blount-Trotter both sing; and their band provides guitar, trumpet, drums, bass and organ.

The War and Treaty’s recent performance at Door Community Auditorium (DCA) was no different: The concert was as vibrant as Blount-Trotter’s red dress and matching tambourine. The blend of music – inspired by musicians such as Ray Charles, Dolly Parton, Aretha Franklin and Johnny Cash – was a jigsaw puzzle that, though easy to mess up, clicked just right.

The band played a country-rock song called “Blank Page” from its upcoming album before a soul-filled, R&B track. Next was a ballad with just Trotter, Blount-Trotter and their guitar player and music director, Max Brown. The songs shouldn’t have worked together, but they did in a perfect fit, creating a distinctive, eclectic sound.

“I’d put their music in that ‘broad as a barn’ category of Americana,” DCA executive director Cari Lewis said. “You’ll hear a bit of blues, gospel, soul, bluegrass and country.”

The performers’ voices and musicianship lent themselves to all of the genres and more, provoking standing ovations for both the tear-filled “Dear Martha” and the high-energy head-nodder “Five More Minutes.” Both relate to Trotter’s two tours of military duty in Iraq, and he uses music as therapy.

“​​Being on stage is healing,” he said. “God, my family and music help me conquer PTSD. It’s an ongoing fight that love is helping me win.”

Love, in fact, was a consistent theme throughout the night, making it easy to fall into the performance, so free was it of stiff dialogue and programmed interactions on stage.

Instead, it was a flowing, open expression of Trotter and Blount-Trotter’s love for each other, their band, their music and the audience. The stories they told drew the audience in further: Trotter talked about a captain he knew in the army; they lamented that they hadn’t been able to visit any lighthouses while they were here in the county; and Blount-Trotter said she’d encouraged Trotter to hit some very high notes when they were recording in the studio.

“It’s a good thing we had our last kid 10 years ago,” he said, making the audience laugh.

Both walked into the audience during the final encore song to thank people for coming and dole out high-fives.

The War and Treaty’s musicianship, poetic songwriting and irreplicable voices made this a performance that was well worth the rainy drive home. If the group does get a chance to see Door County’s lighthouses someday, let’s hope they’ll grant us another performance during that visit.